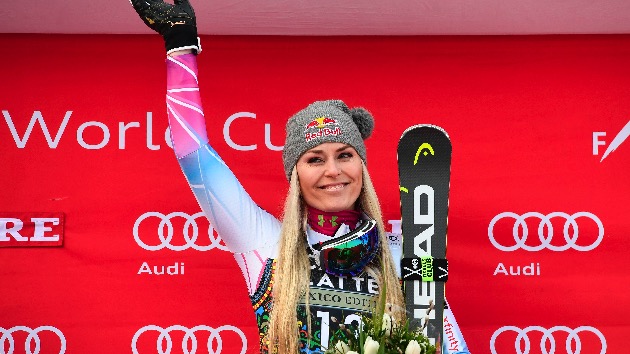 JONATHAN NACKSTRAND/AFP/Getty Images(NEW YORK) — The FIS Alpine World Ski Championships are set to take place in Are, Sweden next week, and star Lindsey Vonn says those races will be her last in professional skiing.
Citing years of injuries and surgeries as the catalyst for her decision, the three-time Olympic medalist announced her retirement plans Friday in a Facebook post that included photos of her achievements over the years.
"I am struggling with the reality of what my body is telling me versus what my mind and heart believe I'm capable of. The unfortunate reality is my mind and body are not on the same page," Vonn wrote. "After many sleepless nights, I have finally accepted that I cannot continue ski racing. I will compete at the World Championships in Downhill and Super-G next week in Åre, Sweden and they will be the final races of my career."
Vonn continued that for several years she has struggled with "more injuries and surgeries than I care to admit," and that her desire to push limits in her sport has come with it share of "dramatic crashes" in addition to success.
She rehabbed her way back from a painful crash last year, but crashed again last November, tearing her LCL and sustaining three fractures, she explained in her post. Now, she admits, her body is "broken beyond repair."
"My body is screaming at me to STOP and it's time for me to listen," she said.
Vonn will hold a press conference on Monday in Sweden, where she'll discuss her plans beyond retirement.
In the meantime, the pro skier said she is "not giving up," but she is "just starting a new chapter," while encouraging her young fans not to lose faith in their dreams and to fight for what they love.
Vonn thanked her fans for their support before expressing her excitement for her last races.
"Can't wait to see some of you in the finish in Are where I will give it my all one last time," she wrote.
Copyright © 2019, ABC Radio. All rights reserved.