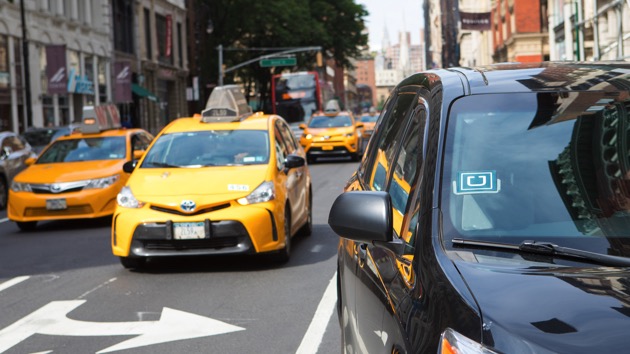 nycshooter/iStock(NEW YORK) — Getting around the nation’s largest city is getting more expensive.
A judge in New York cleared the way for a $2.50 surcharge to be added to a taxi fare. An extra $2.75 will be added to the cost of Uber, Lyft and other for-hire rides.
The extra fees apply to rides in Manhattan that begin, end or pass through south of 96th Street. They were included in Gov. Andrew Cuomo’s state budget to ease traffic and raise an estimated $1 billion per year to help fix the subways.
A group of taxi drivers sued to block the fees, which, they argued, would make “taxicab rides so financially unattractive to consumers that the industry is sure to collapse in its entirety.”
Judge Lynn Kotler of State Supreme Court in Manhattan rejected the warning, writing the taxi drivers “have not demonstrated irreparable injury” because the congestion surcharge is meant to be passed directly to consumers.
The judge’s order lifted a temporary restraining order but allowed the taxi drivers’ lawsuit to continue.
"We feel triumphant that the state's motion to dismiss was denied and it gives us hope that ultimately the state will do the right thing and spare drivers the poverty and crisis that would result from this congestion fee,” said Bhairavi Desai of the New York Taxi Workers Alliance.
The surcharge will be collected beginning 12:01 a.m. ET on Feb. 2. It applies to for-hire transportation including taxis, "green cabs," limousines, black cars, livery and rideshare vehicles.
“The judge’s decision is a positive step in our efforts to find a dedicated revenue stream for our subways and buses, as well as easing congestion in Manhattan’s central business district,” said Patrick Muncie, a spokesman for Gov. Cuomo. “We will continue to defend the law, which was approved by the legislature, at the next court date so that New Yorkers have a safe, reliable transportation system.”
Uber said it would immediately increase the price of its rides in New York.
“We agree that street congestion is a problem in NYC, but we believe the best way to address it is through the adoption of a comprehensive congestion pricing plan that is applied to all personal vehicles, trucks, and commercial vehicles, not just for-hire vehicles and taxis,” Uber said in a blog post.
Copyright © 2019, ABC Radio. All rights reserved.