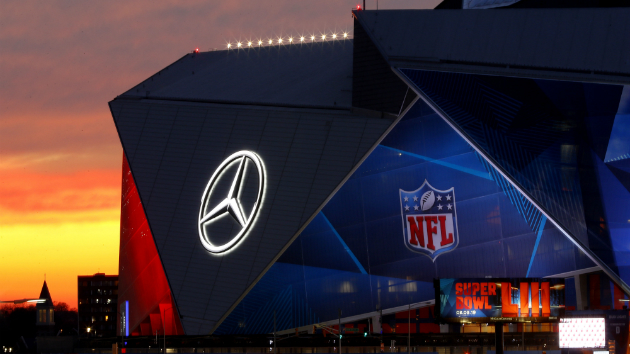 Justin Heiman/Getty Images(ATLANTA) — Super Bowl LIII is this Sunday and you know what party you're planning to attend, how to get there and which of your friends and family will be there.
Now you just need to know everything else.
ABC News is here to help — whether you're a rookie or a perennial Pro Bowler when it comes to the annual NFL championship game.
The basics
Super Bowl LIII (that's 53, for those who struggle with Roman numerals) is Sunday, Feb. 3, and the official kickoff time is 6:30 p.m. on CBS.
The NFC champion Los Angeles Rams (13-3) will face off against the AFC champion New England Patriots (11-5). If you're feeling a sense of deja vu, yes, the Patriots have been in the Super Bowl three years in a row and four of the last five.
The Patriots are the betting line favorites at -2.5. The over/under is 56.5.
If you don't have a team, know that the Patriots are fairly reviled outside of a certain six states.
Veteran play-by-play man Jim Nantz and Tony Romo, the former Dallas Cowboys quarterback in his second year as an analyst, will be calling the game.
Former referee Gene Steratore will also be in the booth to talk officiating and Tracy Wolfson will be reporting from the sidelines.
The commercials
The only thing more scrutinized than the play on the field is often the commercials that air in-between the action.
With each spot costing millions, you can bet companies will pull out every stop to make them memorable. That certainly means a lot of star power — everyone from Steve Carrell to Harrison Ford to Jeff Bridges and Sarah Jessica Parker will make appearances.
Bumble, a dating app where women must first message men, has turned to tennis legend Serena Williams in its advertising spot. The ad is women-centric, of course, and even directed by an all-female team.
Cardi B will appear in Pepsi's ad, alongside Carrell, as they answer the question, "Is Pepsi OK?" and Christina Applegate will get locked out of her car in an ad for M&Ms.
Classics like the Budweiser Clydesdales will also be returning to the roster of ads.
The halftime show
The only thing more controversial than a questionable pass interference call is this year's halftime show.
The annual extravaganza is usually a career highlight for one A-list musician. Prince, Lady Gaga, Justin Timberlake, Beyonce, Bruce Springsteen and Katy Perry are among the boldface names to have done the honors.
Maroon 5 will be performing at this year's halftime — but not without controversy. Travis Scott and Big Boi will be joining him onstage.
Many performers turned down the opportunity — reportedly Rihanna and Pink among them — as a protest against the league's alleged treatment of former San Francisco 49ers quarterback Colin Kaepernick.
The halftime show will go on Sunday, but Maroon 5 lead singer Adam Levine has been mum about the gig. The NFL skipped its usual press conference before Levine eventually told Entertainment Tonight, "I'm not in the right profession if I can't handle a little bit of controversy. It's what it is."
As a means of heading off some criticism, Maroon 5 and Scott will be donating half a million dollars each to Big Brothers Big Sisters of America and Dream Corps, respectively.
The players and coaches
This year's Super Bowl is a matchup between possibly the best coach (Bill Belichick) and best quarterback (Tom Brady) of all-time versus the current best young coach (Sean McVay) and best young quarterback (Jared Goff).
Belichick and Brady are competing in their ninth Super Bowl. They are 5-3 in their first eight appearances.
You probably know Brady: tall, handsome, future Hall of Famer, married to a supermodel. The 41-year-old already has more Super Bowl rings than any other starting quarterback, but he'd like to add a sixth this year.
The other marquee players? You should know Patriots tight end Rob Gronkowski. From Tide ads to celebrity gossip sites, and even professional wrestling, he's one of the most marketable names in the sport. There's also a chance this is his last game as a pro.
On the other sideline, this is the first Super Bowl for both McVay and Goff. Goff is in just his third year in the NFL and McVay his second as a head coach.
Goff is just 24 and a San Francisco Bay area native — just like Brady. His coach, McVay, is the youngest in the NFL and will be the youngest in Super Bowl history at just 33. Yes, eight years younger than Brady.
McVay is also known for his model partner: Veronika Khomyn. The Ukrainian model regularly posts snaps of the two on her Instagram page.
The pregame
The pregame programming for the Super Bowl is much longer than the game itself.
CBS begins its pregame at 11:30 a.m. — a full seven hours before kickoff. The channel airs That Other NFL Pregame Show at 11:30 a.m., Road to the Super Bowl from noon to 1 p.m., Tony Goes to the Super Bowl — featuring analyst Tony Romo — from 1 p.m. to 2 p.m., and The Super Bowl Today right up until the feature broadcast begins at 6 p.m.
President Donald Trump will also be doing a pretaped interview with CBS around 3:30 p.m.
If you want to start even earlier, ESPN begins the preshow at 10 a.m. and goes for four hours until 2 p.m.
NFL Network begins its NFL Gameday Morning from 9 a.m. to 5:30 p.m.
The game
If you like high-scoring passing attacks, you should be happy with the Rams. Goff threw for over 300 yards eight times this season and the Rams scored over 30 points in 13 games, including the playoffs.

Brady is of course one of the best to ever throw a football, and with receivers like Gronkowski and Julian Edelman, the game will likely see plenty of touchdowns scored.
The result may come down to the health of Rams running back Todd Gurley. There's been plenty of mystery around his health, especially after the All Pro had just four carries in the NFC Championship.
You can be sure there will also be talk about the referees, and especially pass interference, after the Rams lucked into a bad call in the NFC Championship that would've all-but-ended the game in favor of the New Orleans Saints. The NFL has since apologized.
It should be a close game regardless of who wins.
Copyright © 2019, ABC Radio. All rights reserved.