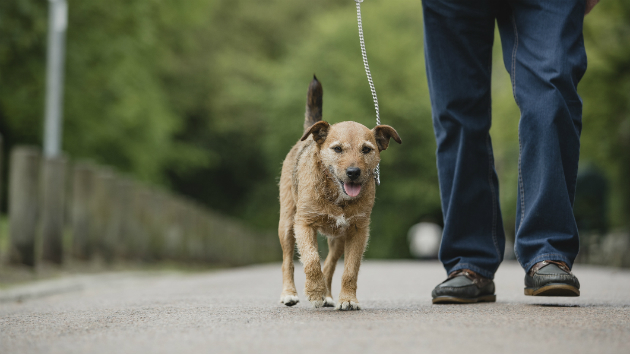 SolStock/iStock(TEHRAN, Iran) — Fatemeh can't walk her dog, Peaky, anywhere in Tehran. The chief of police of Iran’s capital said this week that dog walking would be banned everywhere in the city.

Fatemeh, 33, who requested her last name not be used for fear of repercussions, has been walking Peaky in the backyard of her apartment building instead.

“People who walk dogs will be prosecuted,” Brig. Gen. Hossein Rahimi said in an interview with the semi-official Fars News Agency on Tuesday.

“Public places are not meant for walking dogs and animals," Rahimi said. "Driving them in cars is forbidden, too."

These remarks have increased dog owners’ worries.
“It is not the first time we are warned. We have always had to be cautious walking our pets,” Fatehem told ABC News.

Afraid that her dog would be seized by the police after the new regulation, Fatemeh decided not to even drive with Peaky in the car.

“Formerly, you could feel safe if you would drive your dog in the carrier, but I do not know where the red line is now,” she said.

There have always been problems for people walking their dogs in Tehran, but a clear ban makes the situation more serious. However, Fatemeh is happy for the privilege of having a backyard for Peaky. She feels sad for people who don’t have one.

“Those poor dogs will get depressed,” she said.

Many believe that the new restriction was created after news went viral two weeks ago about a 10-year-old girl getting seriously injured by an unleashed dog in Lavasan, a town northeast of Tehran. The news and gruesome pictures of the girl’s injuries led to a backlash against walking dogs, especially from political and religious conservatives.

Walking Peaky before the new ban, Fatemeh faced mixed reactions. She says that once, a woman wearing a chador — a long black veil mostly worn by religious or conservative women — asked her to take Peaky out of a park where her son was playing, and called the dog “unclean.”

“These people mostly do not know about dogs getting vaccinated and receiving constant check-ups,” Fatemeh said.

But not everyone has had negative experiences walking their dogs in the city. Maliheh Riyazi, 30, a sociologist, has had different experiences with the reactions of conservative Iranians to dog walking.
After walking her friend’s golden retriever for a few months, she believes many conservatives would like their children to play with dogs.

“I have been frequently asked in the parks by women in conservative clothing to let their children play with the dog I was walking,”Riyazi said. “They would say they couldn’t have dogs at their places as dogs are religiously considered as unclean, but they want their kids to be raised with the love for animals.”
In Arabic, dogs are called “najis,” a technical religious term meaning “unclean.” If, for example, you touch a dog with a wet hand, you need to wash your hand three times before you pray. The word has become a part of the Farsi language and Iranian culture.

Many on social media have sided with animal lovers and dog-owners, advocating for them to find a way out of the restrictions by asking authorities to create a law for safe dog walking rather than a general ban.
“It is wrong to guilt everyone for one person’s fault," reads one tweet. It features a picture of a dog with a leash in its mouth, with a caption that reads: "Make laws on how to walk me. My owner and I respect law and people.”
Copyright © 2019, ABC Radio. All rights reserved.