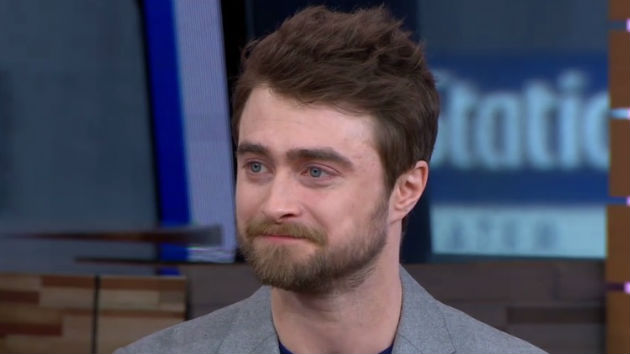 ABC(NEW YORK) — The Harry Potter franchise has more than its share of obsessed fans, so you might expect its star Daniel Radcliffe to have a pop culture obsession of its own. He does indeed, but it's rather unexpected.

"I mean….The Bachelor," he confessed to a fan who asked him about it on ABC's Good Morning America Friday. "I say this to people and they seem surprised. And I'd also like to say, I used to be one of those guys who's like, 'Yeah, my girlfriend makes me watch it.' It's not. I'm making the choice, it's me."
He went on, "I'm very obsessed particularly with this season. Also, [the current bachelor Colton Underwood] seems like a nice person. They haven't all been."
Radcliffe stars in a new TV comedy Miracle Workers, in which he plays an put-upon angel toiling away for God, played by Steve Buscemi.
"Steve is a wonderful human being and so kind and lovely," Radcliffe said. "He plays a version of God that is kind of disillusioned with his own creation…he's sitting there watching all of the terrible things happening in the world and then decides to change the channel."

Radcliffe explains, "Our job as the series goes on is to remind him why Earth and human beings are so great."
Miracle Workers premieres on TBS Feb. 12.

Daniel Kaluuya says he “wasn’t invited” to the world premiere of ‘Get Out’
No charges filed against Rochester police officers involved in death of Daniel Prude
Matt James breaks silence on ‘Bachelor’ controversy: “It has been devastating and heartbreaking”
‘The Bachelor’ recap: The hometown dates end in an emotional departure
Ben Higgins reveals the true reason why he lost 30 pounds while on ‘The Bachelor’
Rachel Lindsay hopes Chris Harrison will “move forward” following ‘Bachelor’ comments