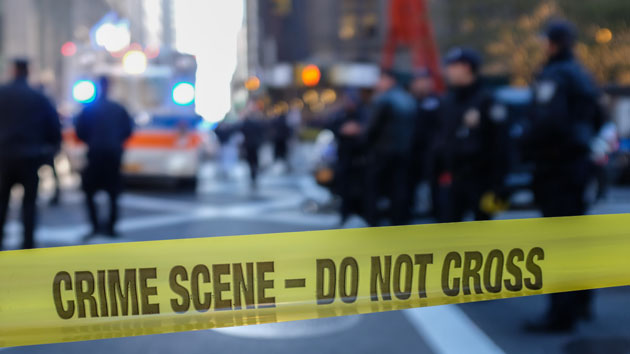 Jack Berman/Getty Images(LOS ANGELES) — It appeared to be a well-planned heist.
Burglars smashed their way into a multi-million dollar Los Angeles mansion, ransacked the home, and somehow managed to take a 1,000-pound safe with $300,000 worth of money and jewelry inside.
Records show the home belongs to inventor Ronald Katz, the brother of Broadway star Joel Grey and uncle of “Dirty Dancing” star Jennifer Grey.
Los Angeles Police are now searching for the suspects. Surveillance video obtained first by ABC News shows a woman jumps into the passenger’s seat of a red SUV before it drives away with its hatch up and a massive safe visible from the back.
Police say a housekeeper was at home and heard noises, but that she thought it was the owners returning home. Then, she saw the suspects inside the mansion.
Detectives believe the suspects smashed their way through the home’s front gate using their SUV. Pieces of that vehicle were left behind — including a side mirror — and they are being analyzed by police.
The home is worth around $15 million and is down the street from the Playboy Mansion.
The Katz family declined to want to talk about the burglary.
The LAPD has been aggressively going after serial burglars who have been hitting L.A.’s wealthiest and most famous homes in recent years.
Last month, detectives announced the arrest of 32-year-old Benjamin Ackerman, who is accused of burglarizing numerous celebrities’ homes. His alleged victims included Usher, Jason Derulo, Adam Lambert, and a member of the cast of The Real Housewives of Beverly Hills. Last year, Los Angeles Police also dismantled a burglary ring that targeted wealthy victims.
Copyright © 2019, ABC Radio. All rights reserved.