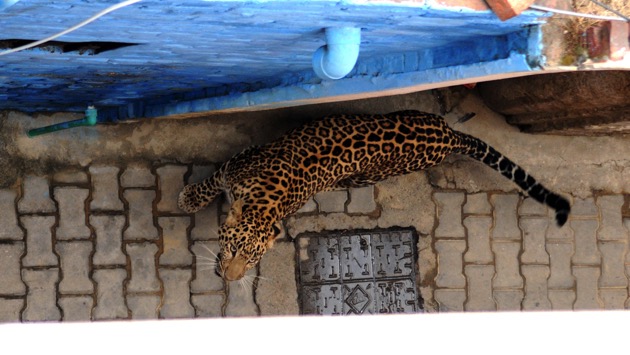 Pardeep Pandit/Hindustan Times(LONDON) — Editor's note: The following contains graphic content. Viewer discretion is advised.
A wild leopard injured six people in India after being on the loose for 11 hours, officials said.
The animal was finally captured in the northern Indian city of Jalandhar by a local wildlife department, according to the Indian Express. None of the injuries sustained by those attacked are believed to be life threatening.
Video footage shows two men trying to throw a net over the leopard, which had found itself trapped in an alley. The leopard then leaps up, knocking one man to the ground, before vaulting a fence and running through the urban area, mauling several people in the process. Terrified bystanders can be seen fleeing the scene.
It is still unclear how the leopard found itself in the densely populated district. Locals reportedly threw stones at the leopard, which had to be shot several times with tranquilizers before it was finally caught by local officials, according to The Tribune.
Kuldeep Kumar, principal chief conservator of forests, told The Tribune the leopard likely strayed into Jalandhar from its usual habitat in the city's surrounding rivers.
“After rescuing him, we will examine if he has any injuries and needs care," Kumar said. "We may keep him for some days, if required."
The animal will stay at a local zoo before being released again into the wild, he added.
The leopard population in India is estimated to be between 12,000 to 14,000. Leopards usually live in forest habitats, according to the wildlife foundation World Land Trust.
This is not the only instance of big cats in India coming into conflict with human populations in recent months. In November, a tiger in the west-central Indian state of Maharashtra killed 13 people before being shot dead, which prompted fierce criticism from politicians and animal rights activists.