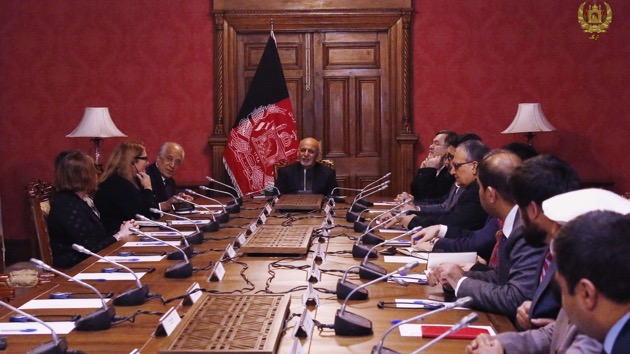 Afghan Presidency Press Office / Handout/Anadolu Agency/Getty Images(WASHINGTON) — President Donald Trump said the U.S. will bring "our people back home" if there is an agreement with the Taliban, touting his administration's talks with the militant group even as they have been criticized for negotiating an American "surrender" and abandoning the U.S.-backed Afghan government of President Ashraf Ghani.
"For the first time, they're talking about settling, they're talking about making an agreement, and we bring our people back home if that happens," the president said Thursday in the Oval Office. "We'll see what happens. But they're in very serious negotiations for the first time."
The optimistic tone come hours after U.S. Special Representative for Afghanistan Reconciliation Ambassador Zalmay Khalilzad defended his talks and cautioned against a rush to judgment.

After criticisms of the early details of his peace talks with the Taliban, U.S. Special Representative for Afghanistan Reconciliation Ambassador Zalmay Khalilzad is defending those talks and urging others not to rush to judgment yet.
While Khalilzad said his nearly week-long meeting with Taliban officials yielded "significant progress," critics, including a former U.S. ambassador to Afghanistan, have accused the Trump administration of negotiating an American surrender and abandoning the U.S.-backed Afghan government of President Ashraf Ghani, who reportedly wrote a letter to President Donald Trump expressing concerns about the withdrawal.

As a candidate and once in office, Trump has been skeptical of U.S. military deployments overseas, calling them a waste of American blood and treasure. Against the advice of top aides, he ordered the withdrawal of U.S. forces in Syria last month and has publicly questioned the necessity of U.S. troops in South Korea.
He ordered additional troops into Afghanistan in August 2017 but said at the time it went against his instincts.

Critics have said that leaves him open to being outmaneuvered by the Taliban, who are poised to seize control of large swaths of the country once U.S. troops withdraw. But Khalilzad, himself a former U.S. ambassador to Afghanistan who was brought on by Secretary of State Mike Pompeo to negotiate with the militant group, pushed back against early criticism of the deal he is working on.

"Skeptics have rushed to judgment based on just the first part of a much larger effort, as though we have a completed agreement," Khalilzad wrote on Twitter Thursday. "But you can't eat an elephant in one bite! And a forty year old war won't be resolved in one meeting, even if that meeting runs for close to a week."

1/4
The path to peace doesn’t often run in a straight line. The situation in #Afghanistan is complex and like all sensitive talks, not everything is conducted in public. Let me take a moment to explain where we are…

Earlier in the week, Khalilzad, himself a former U.S. ambassador to Afghanistan who was brought on by Secretary of State Mike Pompeo to negotiate with the militant group, announced that the two sides had made progress on countering terrorism and a U.S. troop withdrawal.
In particular, the Taliban had agreed to never allow terror groups like al-Qaeda or the Islamic State to find safe haven in the country — 17 years after al-Qaeda's presence led to the U.S. invasion.
But the negotiators are "not even finished with these issues yet," Khalilzad said Thursday. In addition to resolving those, they also have to work on the "vital issues" of intra-Afghan talks and a nationwide ceasefire, confirming what ABC News reported Monday.
Those "intra-Afghan" talks are particularly challenging and important. The Taliban have long refused to recognize or engage with the Afghan government, dismissing it as a puppet of the U.S. Getting them to agree to even speak to Afghan government officials has been nearly impossible so far.
A State Department spokesperson told ABC News that remains an essential part of any U.S.-approved deal: "Any final agreement must include an intra-Afghan dialogue that includes the Taliban, the Afghan government and other Afghan stakeholders. Afghans must come together to negotiate a political settlement on the future of their country," the official said.
But critics argue the fact that these talks are happening now without representatives from Ghani's government is a problem in and of itself.
Retired U.S. ambassador Ryan Crocker, who served as envoy to Iraq, Afghanistan, Pakistan, Syria, Kuwait and Lebanon, said the administration was undermining the Afghan government: "By acceding to this Taliban demand, we have ourselves delegitimized the government we claim to support," he wrote in a Washington Post op-ed. "By going to the table we were surrendering; we were just negotiating the terms of our surrender."
He warned that whatever the Taliban may promise in talks would now be empty because the militant group knows "that when we are gone and the Taliban is back, we will have no means of enforcing any of" those commitments.
That seems to have unnerved Ghani himself, who sought to reassure the nation in an address Monday that any deal would be made with his government's awareness and full participation.
Ghani's office and a National Security Council spokesperson declined to comment to ABC News.
He took his concerns a step further this week, according to the New York Times, writing a letter to Trump about how Afghanistan could reduce costs for the U.S. and how the U.S. could bring down troop levels to a "more efficient level," seemingly instead of a total withdrawal.
Even though they are not in the meetings, the U.S. insists Ghani's government has been briefed by Khalilzad and his team every step of the way — a point the U.S. envoy was trying to make Thursday. His message was, "Let's take a step back and wait and see where all this goes before anyone expresses alarm about anything that's happening here," a U.S. official told ABC News.
But insisting on a seat at the table for the Afghan government had long been the U.S. position. As recently as November, the State Department said that the U.S. only supports "an Afghan-led, Afghan-owned peace process."
In fact, the department spent months declining to even confirm that Khalilzad or another senior U.S. diplomat Alice Wells was even directly meeting with Taliban representatives without the Afghan government.
"This is going to become a conversation or will be a conversation between the Afghan government and also the Taliban. The United States government stands ready to assist, to facilitate, but this has to be an Afghan-led, Afghan-owned peace process," State Department spokesperson Heather Nauert said in September.
For his part, Khalilzad tweeted, "There are many players, many issues, and many moving parts. But we are on the right path, together."
Copyright © 2019, ABC Radio. All rights reserved.