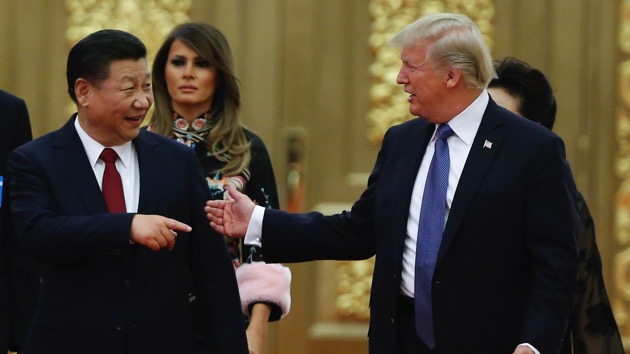 Thomas Peter – Pool/Getty Images(WASHINGTON) — President Donald Trump struck an optimistic tone on Thursday as high-stakes trade negotiations with China were underway for a second day in Washington.
Speaking in the Oval Office for the signing of an executive order highlighting the administration's "Buy American" policy, the president said there is a "very good chance" of a trade deal happening.
In a series of tweets earlier Thursday, the president declared “Meetings are going well with good intent and spirit on both sides.”
But Trump said no final agreement will be made until he meets one-on-one with China’s President Xi “in the near future."
The president was scheduled to meet with Chinese Vice Premier Liu He later Thursday.
The talks between the United States and China began Wednesday at the White House as negotiators attempt to beat the clock in a 90-day trade war truce agreed to by President Donald Trump and Chinese President Xi Jinping last month at the G-20 in Argentina.
The negotiations come just days after a 13-count indictment was unsealed in federal court in Brooklyn criminally charging four defendants — Huawei Technologies, two Huawei affiliates — Huawei Device USA and Skycom Tech — and Huawei’s chief financial officer, Meng Wanzhou. The charges include stealing U.S. trade secrets and violating Iran sanctions.
The United States and China have been involved in months of tariff tit-for-tat that has slowed the Chinese economy and has had a serious economic impact on U.S. manufacturing and agriculture. The nearly month-long partial government shutdown left the United States little economic wiggle room for negotiating.
The negotiations in Washington, led by U.S. Trade Representative Robert Lighthizer and Chinese Vice Premier Liu He, kicked off in the Diplomatic Room of the Eisenhower Executive Office Building. They were joined by Chinese diplomats and Trump administration officials including Secretary of Treasury Steven Mnuchin, Commerce Secretary Wilbur Ross, trade adviser Peter Navarro and economic adviser Larry Kudlow.
Mnuchin told Fox Business he expected "significant progress" to trade and market access between the two countries. But he added that the criminal charges brought against Huawei are not a part of negotiations.
Trump has been optimistic about the talks, as pressure builds from Congress to Wall Street for the White House to strike a deal. He said that if no deal is made by March 1st — the end of the 90-day period — he will increase the tariffs on Chinese goods from 10 percent to 25 percent.
"I think China would like to make a deal," Trump told members of Congress last week. "We'd like to make a deal."
Still, Trump made reinvigorating the manufacturing industry — largely devastated in many parts of the United States — a top priority during his presidential campaign.
"We can’t continue to allow China to rape our country and that’s what they’re doing," Trump said at a rally in Fort Wayne, Indiana. "It’s the greatest theft in the history of the world."
Copyright © 2019, ABC Radio. All rights reserved.