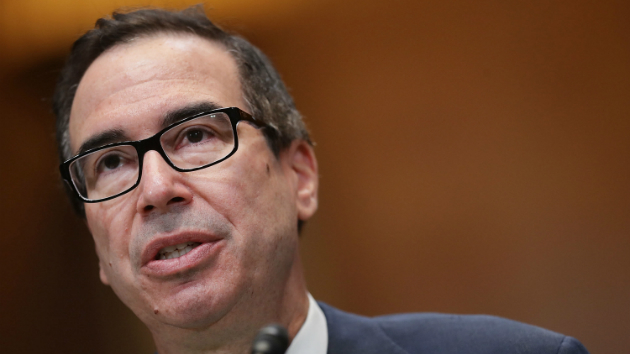 Chip Somodevilla/Getty Images(WASHINGTON) — The Treasury Department fired back at a Democratic congresswoman who questioned whether a possible conflict of interest should have disqualified Secretary Steven Mnuchin from the department’s decision to lift sanctions on a Russian oligarch, writing a response letter first obtained by ABC News on Wednesday.

The letter to Rep. Jackie Speier, D-Calif., disputed claims that Mnuchin sold a stake in a Hollywood movie production company to a Ukrainian-born oligarch.

“To be clear, the Secretary did not sell his stake in RPDE (RatPac-Dune) to Mr. Blavatnik or his companies,” according to the letter, penned by Jennifer Bang, deputy assistant secretary for legislative affairs. “The Secretary sold his stake in RPDE to a third party unrelated to Mr. Blavatnik.”
Mnuchin and wealthy businessman Len Blavatnik have both, at times, held significant stakes in the Hollywood film company RatPac-Dune Entertainment, which has held minority ownership interests in blockbuster movies such as Gravity, Wonder Woman, Batman v Superman, The Lego Movie and Creed.

Democrats say Mnuchin’s Hollywood dealings remain opaque and are a source of lingering concern. While the letter said that Mnuchin did not sell his share of the company to Blavatnik, he has not disclosed the identity of the buyer.
Democrats said their questions about Mnuchin’s financial dealings are important because, as Treasury secretary, he played a role in the decision to lift sanctions on companies linked to Kremlin-connected Russian oligarch Oleg Deripaska, who has other business dealings with Blavatnik.

In her letter to Mnuchin last week, Speier, asked if he’s “ever influenced deliberations on sanctions applications when they involved an entity in which you had a financial interest or with which you had a relationship.”

“Given your business relationships with these individuals and your involvement in twice delaying sanctions, weakening the penalties, and eventually proposing relief from sanctions there is clearly a conflict of interest,” Speier wrote in her letter to Mnuchin seeking information about the transaction.

In her letter, Speier based her claim, in part, on a report in the Hollywood Reporter, which identified Blavatnik as the buyer of Mnuchin’s shares of the company. However, Bloomberg reported in 2017 that Mnuchin did not sell his stake to Blavatnik’s company, Access Entertainment, citing a person familiar with the matter.

“Your allegation appears to be based on old, unsourced, uncorroborated rumor reported in the Hollywood Reporter,” the Treasury’s letter read. “The transaction you describe never happened. Therefore, there is no conflict of interest and no basis even to consider recusal.”
This week, several more lawmakers also sought details about any business ties Mnuchin may have to Blavatnik. Rep. Elijah Cummings, D-Md., the chairman of the powerful House Oversight Committee, and Sen. Ron Wyden, D-Ore., the top Democrat on the Senate Finance Committee, wrote to Treasury seeking information on Mnuchin’s relationship with Blavatnik and whether he sought ethics guidance or took steps to minimize potential conflicts of interest.

Blavatnik, a philanthropist who holds American and British citizenship, belongs to a cadre of billionaires with past ties to the Kremlin. Blavatnik holds a significant interest in RUSAL, the Deripaska-linked company that received relief from sanctions. Blavatnik served on the company’s board until shortly after Trump was elected.

ABC News previously reported that Blavatnik, has contributed at least $383,000 to the Republican National Committee since late April 2016 and added another $1 million to President Donald Trump’s inauguration fund. Those figures include more than $12,000 that was later directed to President Donald Trump’s legal defense fund, as first reported by the Wall Street Journal. He did not give directly to the Trump campaign.
Copyright © 2019, ABC Radio. All rights reserved.