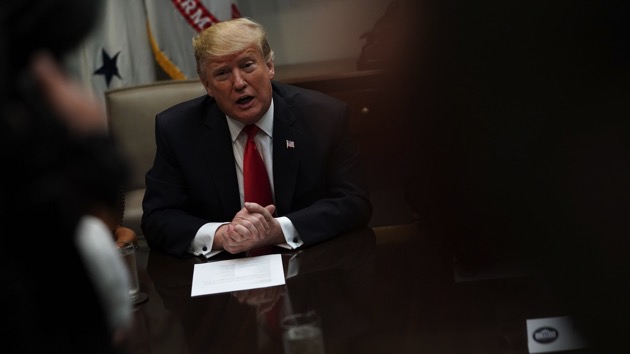 Alex Wong/Getty Images(WASHINGTON) — Senate Minority Leader Chuck Schumer is blasting President Trump for his “extraordinarily inappropriate” criticism of testimony from the nation's intel chiefs before Congress earlier in the week and called on them to essentially stage an intervention with the president.
Trump on Thursday said he will be proven right.
On Wednesday, Trump ripped into the intelligence community for contradicting him at a congressional hearing on a range of issues, including North Korea, Iran, and ISIS.
In defending his foreign policy decisions, Trump tweeted Wednesday that the intelligence officials were “extremely passive and naïve.”
Trump also tweeted “perhaps Intelligence should go back to school!”
He doubled down on his comments in the Oval Office on Thursday. Asked by reporters if he has confidence in his intelligence chiefs, Trump said: "I think time will prove me right."
“I think we’re doing so well on a foreign policy basis," he added.
Schumer said the president’s attacks “will undermine the public confidence in the U.S. government’s efforts to protect our national security and preserve U.S. power and influence abroad,” in a letter he wrote to Director of National intelligence Dan Coats.
Schumer called for Coats, FBI Director Christopher Wray and CIA Director Gina Haspel to insist on a meeting with Trump to “educate him about the facts and raw intelligence underlying the Intelligence Community assessments.”
“He is putting you and your colleagues in an untenable position and hurting the national interest in the process. You must find a way to make that clear to him,” Schumer wrote in the letter.
In a press conference with reporters on Thursday, House Speaker Nancy Pelosi said Trump’s dismissal of intelligence chiefs’ “courageous” Senate testimony on global threats was “stunning.”
Trump “doesn’t have the attention span or desire to hear what the intelligence community is telling him,” Pelosi said.
Even some Republicans took issue with Trump’s criticisms.
Sen. John Thune of South Dakota, the Senate Majority Whip, told reporters on Wednesday that the intelligence community should be trusted.
"I don't know how many times you can say this, but I prefer the President would stay off Twitter — particularly with regard to these important national security issues where you've got people who are experts and have the background and are professionals," Thune said. "I think in those cases when it comes to their judgment, take into consideration what they're saying…I think we need to trust their judgment."
On Thursday, the president seemingly responded to Schumer in a tweet.
“Schumer and the Democrats are big fans of being weak and passive with Iran. They have no clue as to the danger they would be inflicting on our Country. Iran is in financial chaos now because of the sanctions and Iran Deal termination. Dems put us in a bad place – but now good!”
Copyright © 2019, ABC Radio. All rights reserved.