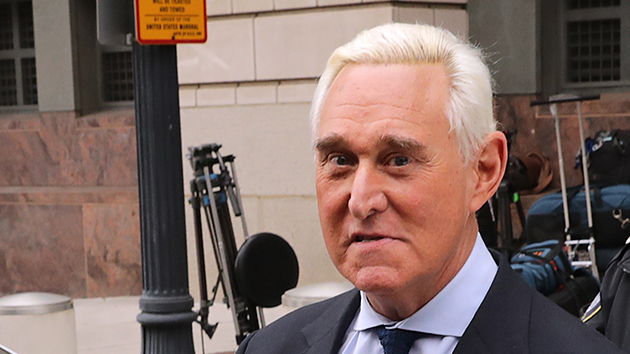 Photo by Chip Somodevilla/Getty Images(WASHINGTON) — Roger Stone, President Trump's longtime ally, responded to what federal prosecutors described as "voluminous and complex" evidence in the special counsel case against him — yet called last week's blockbuster indictment "flawed."
Stone addressed reporters at a hastily organized news conference in Washington, D.C., Thursday afternoon and addressed the indictment and the subsequent arrest, which has been questioned by the president congressional Republicans.
"I believe that over a two-year period, my emails, my text messages and my phones calls have been monitored," he said. "And I have deleted nothing, I have erased nothing."
Before Stone spoke to reporters, federal prosecutors revealed in court documents that the evidence in Stone’s case is “voluminous and complex” and includes iCloud, email accounts, bank records, physical devices that “span several years.”
Stone agreed: "It is voluminous and complex," but later added that the indictment was "flawed."
Stone also said his house was "completely surrounded" last week when FBI agents — whom he described as "professional and courteous" — came to arrest him. He also said he wasn't read his Miranda rights when he was taken into custody.
Stone made his comments a day after President Trump told The Daily Caller that he is considering asking the FBI to review its policies in the wake of the arrest.
Trump called the highly publicized arrest and seizure a "very disappointing scene."
Congressional Republicans also called on FBI Director Chris Wray to provide more answers about his agents' tactics in last week's arrest.
“I am heartened that Senator Graham and also some Republican members of the House are looking into the manner in which I was arrested,” Stone said.
The arrest followed a seven-count indictment from special counsel Robert Mueller as part of the ongoing Russia investigation. The indictment alleges that Stone, 66, lied to Congress, obstructed an official proceeding and witness tampering.

Stone said he has not spoken to Trump since the indictment.
He is due back in court Friday afternoon.
Copyright © 2019, ABC Radio. All rights reserved.