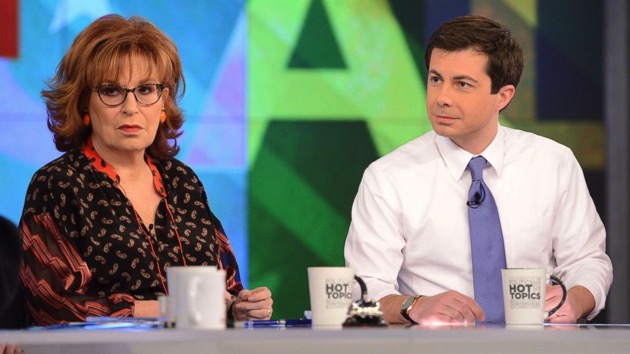 Lorenzo Bevilaqua/ABC(NEW YORK) — An "intergenerational alliance" is necessary to tackle some of the country's biggest problems, said Pete Buttigieg, the South Bend, Indiana mayor and presidential hopeful.
"It's not a bad thing to come from a different generation," Buttigieg said in an interview on ABC's The View on Thursday. "We're the generation that grew up with school shootings as the norm. We're the generation that's going to pay the bill for some of these tax policies right now and we're the ones that are going to be living through the impacts of climate change that are accelerating as we speak."
At 37, he is currently the youngest major Democratic candidate to throw his name in the running.
"So if you're thinking about what the world's going to look like in 2054 — which is when I will be the current age of the current president — you just have a different sense of urgency around some of these issues because they're not somebody else's problem," he said. "They're personal."

Pres. candidate @PeteButtigieg, who is 37, says it's "not a bad thing to come from a different generation": "If you're thinking about what the world's gonna look like in 2054 … you just have a different sense of urgency … they're not somebody else's problem — they're personal." pic.twitter.com/je9flmSJnS

The mayor joined the growing field of Democrats entering the 2020 race last week, announcing on Twitter that he launched a presidential exploratory committee, the precursor to an official campaign.
Buttigieg, who has met with former President Barack Obama about his presidential ambitions, would be the nation's first openly gay presidential nominee of a major party.
When asked if the country is ready for its first gay president, Buttigieg said, "There’s only one way to find out."
Buttigieg came out publicly in a 2015 essay in the South Bend Tribune, less than two weeks before the U.S. Supreme Court legalized same-sex marriage nationally in the case of Obergefell v. Hodges.
"When I came out … it was 2015. We were in the middle of a reelection campaign," Buttigieg said. "It was not obvious that that was going to be a safe thing to do. It was in Indiana. Mike Pence was the governor at the time, and I wound up getting re-elected with 80 percent of the vote. So I think people will evaluate you for the job that you do."
Buttigieg said he thinks serving as the mayor of South Bend — the city where he was born and raised that has a little over 102,000 people, according to the U.S. Census Bureau — for two terms has prepared him to lead the United States.
"Are we sure that being a member of the United States Congress right now is a better preparation than leading a city of any size, especially a community like ours going through a really challenging transformation," Buttigieg said. "When you were a mayor, you get the call. It could be anything from a problem at the zoo to an airplane crashing into a neighborhood to an officer-involved shooting with racial tension all around it."
"But you're not involved in international questions," co-host Joy Behar said.
"No, but I felt pretty involved in international questions when I was deployed to Afghanistan," Buttigieg said.
Expanding on his foreign policy opinions, the former Navy intelligence officer, said he disagrees with newly-elected Rep. Ilhan Omar's, D-Minn., comparison of Israel to Iran, and said it's a "complicated picture."
Israel has, "got to figure out — and we've got to figure out with them as an ally — what the regional picture is going to look like in the future," he said. "It's always been one of the most fiendishly complicated issues and simple answers will not serve us well at a time like this."
Buttigieg's father died Sunday, and Buttigieg said his father was proud of his presidential ambitions.
"It's one of the last things we talked about," Buttigieg said, who was emotional as he spoke about him.
When Buttigieg went to tell his father about his presidential launch, he said he told him that he hoped he would make his father proud. His father was on a ventilator, but Buttigieg said he mouthed the words "You will."
"It's a territory of loss that I'm kind of exploring for the first time," Buttigieg said. "He was a professor so I hear from his students, his colleagues and you begin to realize just how many — it's almost like you get a new family, like I have new siblings in all of his students. I was shaped by him in one way. They were shaped by him in another."
Buttigieg said he thought hard about coming on the show Thursday, but he knew his father would want him to be there.
"So wherever he is, I don't know if you get ABC over there," Buttigieg said to laughs.
Copyright © 2019, ABC Radio. All rights reserved.