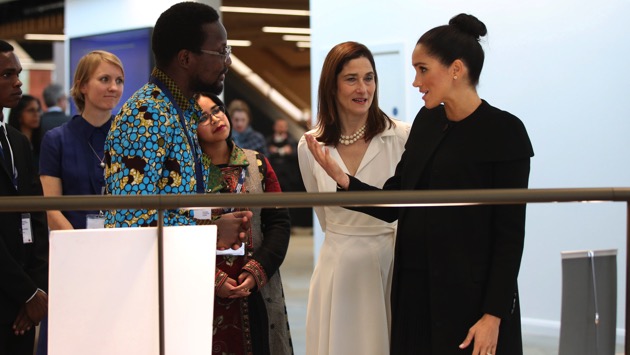 Yui Mok – WPA Pool/Getty Images(LONDON) — Meghan Markle visited the last of her four new patronages Thursday as she charts her charitable work as a member of the royal family.
The Duchess of Sussex, 37, met with college students from the Association of Commonwealth Universities network on Thursday.
Meghan, who is pregnant with her first child, takes over the role of patron of the Association of Commonwealth Universities from Queen Elizabeth II. She met with professors and students Thursday at City, University of London.
Meghan, an alum of Northwestern University, began her work with the association even before her patronage was announced earlier this month. She met in December with university leaders, professors and students to discuss how higher education can help human trafficking, modern slavery, gender equality and climate change, according to Kensington Palace.
While on an official tour of Down Under in October with Prince Harry, Meghan announced two grants to help support access to higher education for women in rural Fiji and touted the importance of equal access to education for women.
Meghan is also patron of the National Theatre, SmartWorks, a charity that provides coaching services for unemployed women, and Mayhew, an animal charity.
Copyright © 2019, ABC Radio. All rights reserved.