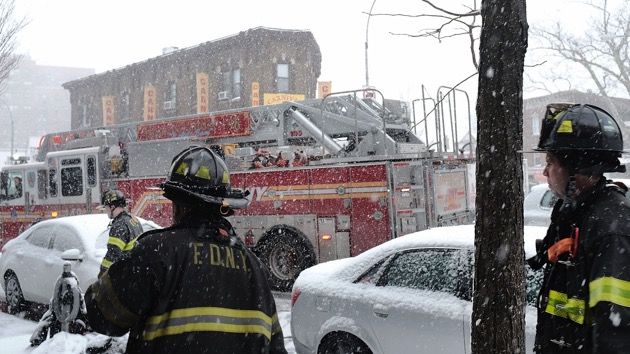 Spencer Platt/Getty Images(NEW YORK) — Firefighters from New Jersey and New York to Indiana are pushing through the brutally cold temperatures to do their jobs.
In New Jersey, a monstrous fire broke out Wednesday night at a paper mill in Elmwood Park. The fire was so massive people that people flying into Newark International Airport could see it.
More than 150 firefighters from at least 10 towns descended on the scene. The temperature hovered near 4 degrees, with a wind chill of negative 12.
The fire was under control early Thursday morning, officials said. No one was injured, officials added.
In New York City, where temperatures plunged to 2 degrees, the coldest of the year, a 5-alarm fire in Brooklyn posed "challenging conditions for our firefighters," the New York City Fire Department tweeted. No injuries were reported.
In the Philadelphia area, where the temperature was 5 degrees, firefighters had to use a blow torch to thaw out frozen fire hydrants.
Firefighters also struggled in the Midwest.
In Cameron, Wisconsin, fire chief Mitch Hansen looked more like an ice sculpture after fighting a fire in minus 50 degree wind chills.
And in Plainfield, Indiana, frozen crews fought an unrelenting blaze at a trash facility, leaving fire equipment coated with ice.
"The weather and large amount of trash is making this a daunting task," the Plainfield Fire Territory said on Facebook.
Copyright © 2019, ABC Radio. All rights reserved.