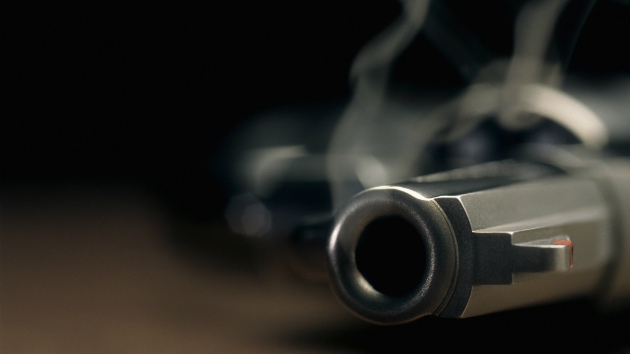 cmannphoto/iStock(ST. LOUIS) — A St. Louis policeman is set to appear in court Thursday morning one week after he allegedly shot and killed his colleague while playing a Russian roulette-like game.
Nathanial Hendren, 29, is facing charges of involuntary manslaughter and armed criminal action in the death of his fellow officer, 24-year-old Katlyn Alix.
Alix was off-duty at Hendren's apartment in St. Louis, Missouri, when she was shot in the chest just before 1 a.m. local time on Jan. 24. Hendren and his patrol partner who was present — both on-duty at the time — rushed Alix to the hospital where she soon died.
The St. Louis Metropolitan Police Department initially called it an "accidental" killing in which an officer "mishandled a firearm." But investigators later determined that Hendren and Alix were playing a dangerous game with a revolver.
According to a probable cause statement from the police department, Hendren emptied the revolver's chambers, put one bullet back in and spun the cylinder. He then pointed the weapon away and pulled the trigger. The gun did not fire. Alix took the firearm, pointed it at Hendren and pulled the trigger. Still nothing happened.
Hendren then took back the revolver, pointed it at Alix and pulled the trigger. This time, the gun discharged the chambered round, according to the probable cause.
Hendren's partner, who has not yet been named, advised investigators that he had told Alix and Hendren that "they shouldn't be playing with guns and that they were police officers," according to the probable cause. The officer said he "felt uncomfortable" with the situation and "didn't want to have any part of it. He was leaving Hendren's apartment when he heard the gunshot," according to the probable cause.
The police department immediately launched an internal investigation into the incident and placed both Hendren and his partner on paid administrative leave. The St. Louis Circuit Attorney's Office launched its own investigation with the help of the Missouri State Highway Patrol.
The St. Louis circuit attorney, Kimberly Gardner, announced on Jan. 25 that her office had filed charges against Hendren.
"This is a devastating incident for Katlyn Alix's husband, parents, family and for our entire community," Gardner said in a statement. "We will do whatever is necessary to get to the truth of this incident. Katlyn's family and this community deserve nothing less."
On Monday, Gardner sent a letter to Col. John Hayden Jr., the St. Louis Metropolitan Police Department commissioner, and Judge Jimmie Edwards, the city's public safety director, raising concerns about how the investigation was handled in its early stages.
Gardner said she believed there was probable cause that drugs or alcohol may have been "a contributing factor" in the shooting. Members of her team began preparing search warrants to have blood drawn from both Hendren and his partner, but police informed them that the local hospital will not honor the warrants — even though that is a common procedure in criminal investigations, Gardner said.
Gardner said her team was later told that, "in lieu of the more exact blood specimen test," the police department's internal affairs division had conducted a breathalyzer test and taken urine samples from both officers under Garrity rights, which shield public employees from self-incrimination.
"This is a serious problem in objective investigative tactics," Gardner said in her letter. "Taking these tests under the cover of Garry appears as an obstructionist tactic to prevent us from understanding the state of the officers during the commission of this alleged crime."
Gardner also expressed concern over the police department's swift assessment that Alix's death was an accident.
"In my opinion, it is completely inappropriate for investigators to approach a crime scene that early in the investigation with a predisposed conclusion about the potential outcome of a case," she said. "I understand your need to get information out to the public quickly regarding officer-involved shooting cases, however, the labeling of any criminal incident as an accident prior to a full investigation is a violation of our duty as objective fact finders."
Alix, a military veteran who graduated from the St. Louis Police Academy in January 2017, was laid to rest Wednesday. Her family is demanding answers.
"The way how everything went down, I don’t like it," Alix's mother, Aimee Chadwick, told CBS affiliate KMOV-TV in an interview. "I think there’s more answers. We need more answers. She loved her job. Even on her days off she would go visit all her friends down there because like I guess when you're a police officer, [you have] that close bond with everyone."