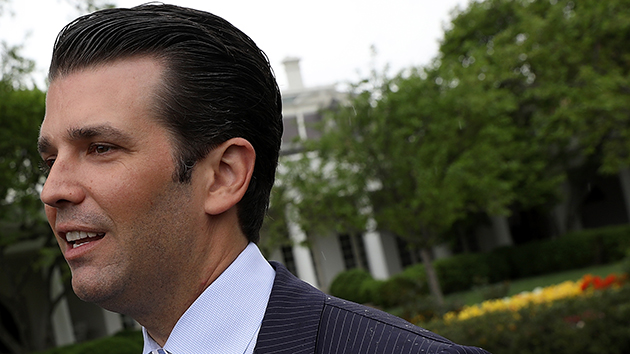 Photo by Win McNamee/Getty Images(WASHINGTON) — Investigators on the Senate Intelligence Committee have learned the identities of three blocked phone calls with Donald Trump Jr. just before and after the now-infamous Trump Tower meeting on June 9, 2016, three sources familiar with the calls told ABC News.
The calls to blocked numbers, which came on June 6, and after the meeting on June 9, were between Trump Jr.’s cell phone and two family friends — NASCAR CEO Brian France and real estate developer Howard Lorber, according to the sources.
Both men have close ties to President Donald Trump and actively supported his campaign during the 2016 election.
When France announced his endorsement of Trump’s candidacy – a decision that drew backlash from the professional driving community – the campaign released a statement, penned by France, in which he said Trump’s “leadership and strength are desperately needed.” At a campaign rally in February 2016, France appeared beside Trump, who he said he had known for more than 20 years, and lauded him as a “winner.”
Trump’s ties with Lorber run even deeper, and have attracted the interest of congressional investigators, sources said. In the 1990s, when Trump started exploring real estate options in Russia, Lorber accompanied him on a tour of Moscow. A real estate developer who has done business there, Lorber appeared in a biographical video of Trump that aired on jumbotrons at the 2016 Republican National Convention before his acceptance speech.
A spokesperson for Lorber said the real estate executive “does not recall having conversations with Donald Jr. in the summer of 2016, but in any event he has absolutely not had conversations with Donald Jr. about any Russian matters.”
A message left for a spokesperson at NASCAR was not immediately returned.
The three phone calls with Donald Trump Jr. to blocked numbers in June 2016 have until now fueled questions about whether Trump Jr. informed his father about the now-infamous Trump Tower meeting before or after it occurred. The controversial meeting between high ranking members of the Trump campaign and an ensemble of Russians has been a source of intense interest from investigators seeking to determine whether the campaign worked in concert with agents of the Russian government to impact the election.
CNN first reported Thursday that the calls did not go to President Trump.
According to documents released by Democrats on the Senate Judiciary Committee in May, the president’s eldest son spoke to an unknown person with a blocked phone number twice on June 6. Trump Jr. placed those calls – which lasted 11 minutes and four minutes, respectively – as he coordinated logistics for the meeting with a conduit to the Russians.
The next day, then-candidate Trump teased an announcement about “the Clintons.”
“I am going to give a major speech on probably Monday of next week and we’re going to be discussing all of the things that have taken place with the Clintons,” candidate Trump said on June 7. “I think you’re going to find it very informative and very, very interesting.”
According to testimony from one of the Russians who sat in on the meeting, the Trump campaign officials became “very frustrated” and “instantly lost interest” when it became clear that the Russians did not have any incriminating information on Clinton.
On June 9, two hours after the meeting concluded, Trump Jr. placed another call to a blocked number, which lasted three minutes.
“Monday of next week” came and went, and no such announcement ever took place.
Democrats in Congress have for months wondered openly whether the blocked phone numbers could belong to the elder Trump. Had that been true, it could have provided evidence conflicting with the president’s insistence that he had no foreknowledge of the meeting. Trump Jr. testified to the Senate Judiciary Committee that he could not recall who was on the other end of the blocked numbers.
Now in the majority, Democrats on the House Intelligence Committee, led by chairman Rep. Adam Schiff, D-Calif., have expressed interest in issuing subpoenas to Trump Jr. and the Trump Organization for more detailed communication records between Trump Jr. and his father, “including calls concerning the Trump Tower meeting.”
The president’s former personal attorney, Michael Cohen, has testified that Trump was, in fact, aware of the Trump Tower meeting beforehand. The president’s current personal attorney, Rudy Giuliani, has called Cohen’s credibility into question.
Lorber and the president have long been friends. The two have golfed together, and Lorber made a guest appearance on an episode of The Apprentice.
Lorber donated $100,000 to Trump Victory, a joint fundraising committee for Trump and the RNC, and served as an economic adviser on the campaign.
Since Trump’s election, Lorber has remained a close ally outside the West Wing. In August of 2018, he hosted a fundraiser for Trump Victory at his Long Island mansion.
Copyright © 2019, ABC Radio. All rights reserved.