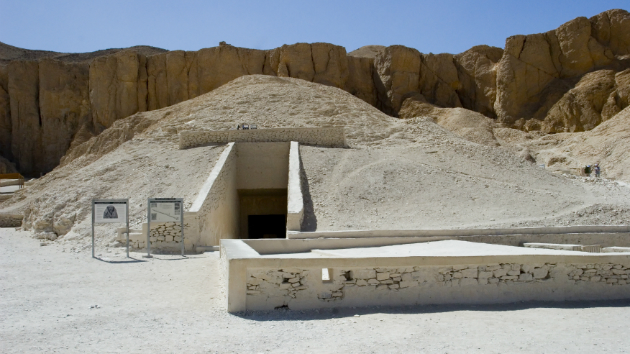 LUke1138/iStock(CAIRO) — A symposium to celebrate the success of a decade-long restoration project on the tomb of King Tutankhamun was held Thursday in Luxor, Egypt — a city on the east bank of the Nile River in the southern part of the country.
During the event, a documentary was screened that detailed every aspect of the research and conservation efforts undertaken to preserve the tomb of the legendary boy king, best known as "King Tut."
The project was launched in 2009 by the Los Angeles-based Getty Conservation Institute and the Egyptian Ministry of Antiquities, amid growing concerns that years of tourists and visitors has taken its toll on the 3,000-year-old tomb.
The tomb was discovered in 1922 by Egyptologist Howard Carter, and has since become the most popular antiquities site in the world.
The main damages incurred were caused by humidity, carbon dioxide and dust brought in by tourists, according to experts who restored the tomb. Filming equipment brought into the tomb has also caused abrasion and scratches on the walls, which required restoration.
Pictures of the completed restoration show the vivid colors of the mural depicting Tut’s life, restored after layers of dust that had created a grey veil were removed.
To ensure that the tomb remains intact and accessible for generations, air filtration and ventilation system were installed, in addition to walkways, lighting and a viewing platform.
The 1,182 square-foot tomb was opened for visitors during the 10 years of work.
“This project conducted the most thorough study of the tomb since the time of Howard Carter,” Tim Whalen said during the press conference.
The preservation effort also focused on identifying the “mysterious brown spots” on the wall paintings, present since the tomb was first opened, to ensure no new growth taking place. DNA and chemical analysis deemed the spots to be “microbiological in origin” but dead and hence not a threat.
Also present at the presser was former minister of antiquities Zahi Hawass. The project was initiated during his term.
Hawass described the project as one of the “best studies research ever done in Egypt.”
Copyright © 2019, ABC Radio. All rights reserved.