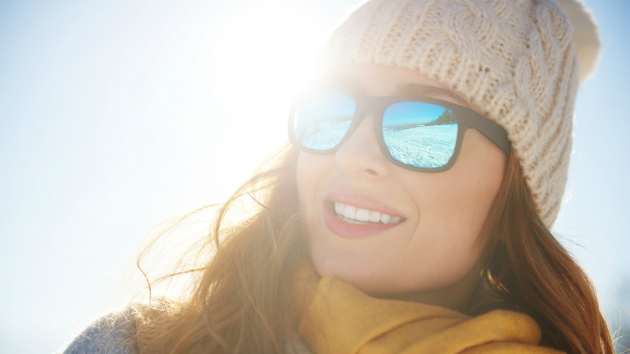 gpointstudio/iStock(NEW YORK) — Scarf, mittens, boots and a coat…but are you forgetting something? Health experts say sunglasses are also an essential winter accessory.
Over 80 percent of Americans wear sunglasses in the summer, but fewer than a third put them on in winter, according to a survey by the American Optometric Association (AOA).

Dr. Samuel Pierce, president of the AOA, told ABC News, “even on cloudy or overcast days, 80 percent of the UV rays are still coming through.”

Cloudy skies and icy temperatures make this easy to forget. But according to Dr. Pierce, “UV should be taken seriously, and unfortunately, the average person doesn’t think about it on a daily basis.”

What are UV rays?
UV rays are an invisible part of the light emitted by the sun, and it’s a type of radiation that can damage the skin and eyes. There are three types of UV rays — UVA, UVB, and UVC. According to the Centers for Disease Control and Prevention, UVA and UVB pose significant health threats, while UVC is mostly absorbed by the earth’s ozone layer.
Why you need sun protection in the winter
In winter months, bright UV exposure can cause photokeratitis, commonly referred to as snow blindness. Skiers and snowboarders who don’t wear eye protection are familiar with this painful eye condition, often described as sunburn of the eye.

Even if you’re not planning on hitting the slopes this winter, just being around snow without eye protection dramatically increases the danger of photokeratitis.
“Fresh snow can reflect nearly 80 percent of radiation off the surface. If you spend a lot of time outdoors, regardless of what you’re doing, you put yourself at greater risk,” Dr. Pierce told ABC news.
The risk of cataracts, or clouding of the eye’s clear lens, is linked to UV radiation as well. Cataracts are the leading cause of blindness worldwide, according to the World Health Organization, and 20 percent of cataracts may be the result of overexposure to UV radiation.

Macular degeneration, leading to blurry vision, also occurs more commonly after too much UV exposure, and that’s also true of cancers surrounding the eye, including melanoma and basal cell carcinoma.
Tips to protect your eyes
Wearing sunglasses or a wide-brimmed hat can shield your eyes in July, and it will do the same during winter months, too.

While people often choose sunglasses for style, Dr. Pierce says, “The important thing is to make sure they’re 99 to 100 percent UVA and UVB blocking.”

Sunglasses that screen out 75 to 90 percent of visible light are best.
Copyright © 2019, ABC Radio. All rights reserved.