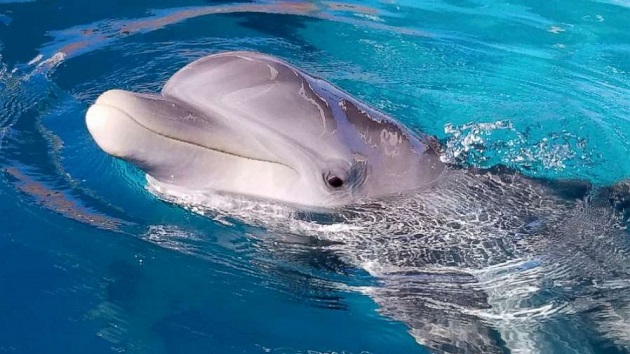 SeaWorld Parks(SAN ANTONIO) — A groundbreaking procedure performed on a young bottlenose dolphin being housed at SeaWorld San Antonio has helped to secure its future as marine officials search for its forever home.
A female bottlenose dolphin named Rimmy, who was rescued in 2017 after becoming stranded at the Sea Rim State Park in Texas off the Gulf of Mexico, underwent the first-ever spinal tap performed on a dolphin in early December of 2018, Dr. Hendrik Nollens, vice president of SeaWorld Parks & Entertainment's veterinary services, told ABC News.
Rimmy, estimated to be around 3 or 4 years old, was treated for 14 months for multiple ailments, including pneumonia and nasal parasites at the Texas Marine Mammal Stranding Network's Galveston center after she was first rescued, according to SeaWorld.
Before the National Oceanic and Atmospheric Administration could find a permanent home for Rimmy at a facility with other dolphins, veterinarians had to rule out a bacterial infection in her central nervous system or brain, according to SeaWorld.
One of the initial tests from Rimmy's medical assessment yielded a "suspicious" result when it came up positive for the bacteria brucella, a "very common" bacteria found in dolphins, especially those in the Gulf of Mexico, Nollens said.
The result could have interfered with Rimmy's ability to being placed in a facility where she could interact with other dolphins, Nollens said, and she would have essentially been stuck in limbo without a home.

But to obtain a more conclusive result, and prove that the initial finding was a false negative, veterinarians needed a "gold standard test" by sampling "a little bit of the fluid that surrounds her brain and spinal cord" to test for the bacteria itself, Nollens said.
The problem was, a spinal tap had never been performed on a dolphin or whale before, especially since the procedure involves holding the animal "perfectly still."
"On a dog it's easy to do," Nollens said. "Dolphins are much bigger — much stronger."
SeaWorld has developed a safe way to anesthetize dolphins within the last decade, Nollens said. In early December, vets inserted a tiny needle into Rimmy — about the same diameter as what would have been used in humans but longer in length.
Not only did they obtain a "beautiful sample," but tests performed on Rimmy's spinal fluid came back negative, and her bill of health is "free and clear," Nollens said.
Now, animal behavioral specialists at SeaWorld San Antonio are working to get Rimmy socialized with other dolphins as NOAA looks to place her.
People who know Rimmy best have described her as happy, inquisitive, and "eager to learn," Nollens said. In addition, she wants to explore and "doesn't want to be alone."
"That is a key part," Nollens added. "She wants to be with other dolphins or with people. But, we prefer, obviously, with other dolphins."
Since Rimmy hadn't seen another dolphin in more than a year, the process was "as simple as putting her in a habitat" with other animals, Nollens said. She was introduced to the other dolphins slowly. First, her handlers at Sea World allowed her to merely hear another dolphin nearby. Then, Rimmy was allowed to catch glimpses of other dolphins on the other side of a channel.
She then had a "smooth" meet-and-great with other dolphins, and she and her pool-mates have been getting along swimmingly ever since — just a few weeks after the socialization process began, Nollens said.
Nollens said finding a way to perform a dolphin spinal tap was a creative solution for Rimmy's unique needs, and resulted from a collaboration between NOAA, the Texas Marine Mammal Stranding Network, researchers at Texas A&M University and the Innovative Veterinary Medicine, which provided a ventilator designed specifically for dolphins to administer the anesthesia.
"It's amazing what can happen when we all work together," he said. "Big things can happen."
Copyright © 2019, ABC Radio. All rights reserved.