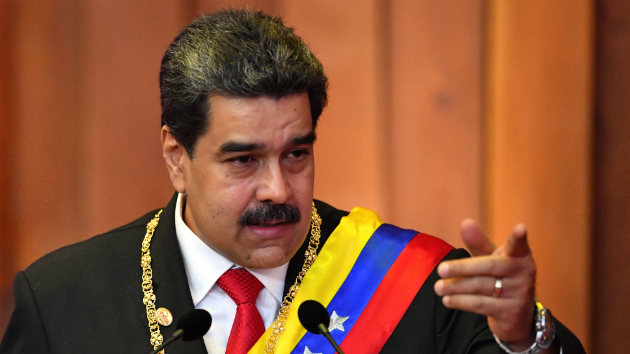 YURI CORTEZ/AFP/Getty Images(MOSCOW) — Nicolas Maduro, Venezuela's embattled president, told Russian state media he's ready to negotiate with the country's opposition and claimed he's in talks to set up international mediation to help resolve the crisis.
In an interview late Wednesday with the Russian state news agency, RIA Novosti, Maduro said his foreign minister was in negotiations with several countries and that the question of international mediation could be resolved in the "coming hours."
"I am ready to sit at the negotiating table with the opposition, so that we can talk for the good of Venezuela, for peace and its future," Maduro said.
Meanwhile, President Donald Trump held a call with the man who has declared himself the country's interim president, Venezuelan opposition leader Juan Guaidó. Trump called to "congratulate him on his historic assumption of the presidency and to reinforce President Trump’s strong support for Venezuela’s fight to regain its democracy," according to a White House readout of the call.
The Trump administration was the first international government to recognize Guaidó as interim president of Venezuela after he swore himself in last Wednesday.
The call took place mere hours after Maduro's attorney general announced he was opening a criminal probe into Guaidó, and requested he be banned from leaving the country. Venezuela's Supreme Court granted the request from the attorney general, Tarek William Saab, who accused Guaidó of "undermining the peace of the nation."
Maduro told RIA Novosti he was not aware yet whether an order for Guaidó's arrest had been issued, though he said it was his opinion a "state coup" was underway.
Venezuela has been locked in a standoff between the two leaders since Guaidó declared himself the country's rightful interim president, backed by the United States and several other countries that have recognized him. So far, Venezuela's military has backed Maduro, as international calls for Maduro to step down have grown and the U.S. has intensified efforts to force him out of power.
Maduro said in the Russian interview he'd sent letters to several governments proposing they help start a dialogue. He didn't say which countries he was in talks with but did name some that have shown "sincere concern" for Venezuela — Mexico, Bolivia, Uruguay and Russia — as well as the Vatican and unspecified "European countries."
"At this stage, we're talking about private negotiations, negotiations by phone between presidents, heads of foreign ministries," Maduro said. "Our minister of foreign affairs is very active. We hope for good results in the coming hours."
Maduro also said he wished to talk with U.S. President Donald Trump but was doubtful of that prospect because John Bolton, a U.S. national security adviser, likely wouldn't allow it.
International support for Maduro and Guaidó has coalesced along familiar Cold War fault lines, with Russia, China and other formerly socialist countries backing Maduro and many Western nations siding with Guaidó. The leaders of France, Belgium, Germany and Spain on Saturday gave Maduro eight days to call new elections or they would back Guaidó.
Maduro told RIA Novosti that he was open to new parliamentary elections in the National Assembly, the opposition-controlled parliament of which Guaidó is the speaker, but demurred on a new presidential vote, saying his election was legitimate.
Sergey Lavrov, Russia's foreign minister, on Wednesday called on the opposition to negotiate with Maduro and to seek international mediation.
"We call on the opposition to display an equally constructive approach, retract the ultimatums, and act independently," Lavrov said at a press conference in Moscow. He said efforts to mediate the crisis were failing because of "the categorical reluctance and refusal of the opposition leaders to hold dialogue," adding that Western countries were encouraging this "destructive stance."
Moscow has emerged as Maduro's strongest public backer, accusing the U.S. of seeking illegal regime change. Russia has invested billions of dollars in Venezuela in recent years, providing crucial loans to prop up its economy in addition to military hardware.
Last week there were reports private Russian military contractors had been dispatched to bolster Maduro's security.
Maduro on Wednesday refused to comment on those reports, which Russia has denied.
"No comment," he said in English. "I am commenting nothing on this."
Efforts to remove Maduro this week have shifted to increasing economic pressure on the nation, with the U.S. this week sanctioning Venezuela's state oil company, PDVSA. The sanctions shut down Maduro's access to revenues from oil exports to the U.S., a critical source of cash for a country already suffering an economic meltdown.
Venezuela is set to lose billions in exports over the next year, making it difficult to repay debts to Russia and even larger ones to China.
Fear of bloodshed in Venezuela has also continued to rise. Guaidó has called on the military to join him, but so far top commanders have publicly sided with Maduro, with scattered defections among diplomats and military attaches stationed abroad.
The Trump administration has not ruled out military intervention in Venezuela, and Bolton stoked that speculation on Tuesday when cameras picked up on a notepad on which he'd scrawled "5,000 troops to Columbia."
Maduro dismissed Bolton's note, telling RIA Novosti it was "clownery" and "stupid childish games."
Bolton on Tuesday warned Maduro not to target Guaidó, writing on Twitter there "will be serious consequences" if he's harmed.
Copyright © 2019, ABC Radio. All rights reserved.