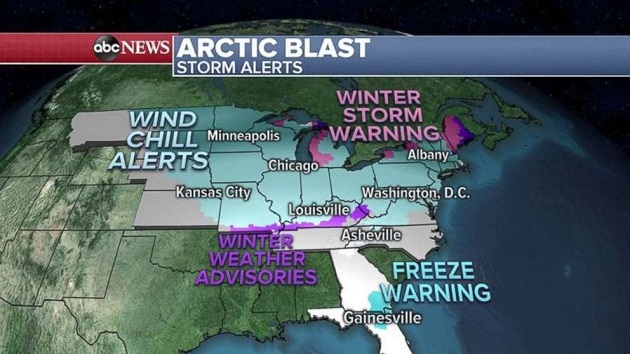 ABC News(NEW YORK) — Brutally cold, below-zero wind chills are paralyzing parts of the Midwest Wednesday — and soon, the freezing temperatures will be felt on the East Coast.
Extremely dangerous wind chills (what it feels like outside) have plummeted to minus 66 degrees in Ponsford, Minnesota; minus 55 degrees at the Minneapolis–Saint Paul International Airport; minus 46 degrees in Des Moines; and minus 44 degrees in Chicago.
The coldest wind chill in the U.S. Wednesday morning was in Ely, Minnesota, which clocked in at a bone-chilling minus 70 degrees. That's just 1 degree shy from the coldest wind chill ever recorded in Minnesota.
The actual temperatures in Minneapolis and Chicago reached minus 28 and minus 23 degrees, respectively. That's a stark contrast to the temperature in Anchorage, Alaska, where it's 34 degrees.
As the cold takes over, the U.S. Postal Service has suspended delivery for Minnesota, western Wisconsin, western Illinois and Iowa.
Over 800 flights have been canceled at Chicago's airports for the day, and Amtrak suspended all Wednesday trains to and from Chicago.
Classes are even canceled at colleges, including the University of Chicago, Northwestern, University of Wisconsin – Madison and the University of Michigan – Ann Arbor.
The extreme freeze comes as whiteout conditions set in from the Dakotas to western New York state Tuesday.
Snowfall reached up to 18 inches in Wisconsin and 17 inches in Michigan. The Upper Peninsula of Michigan could even see 10 more inches of snow.
Residents of western New York state, who are already seeing over 1 foot of snow, could see 3 to 4 feet over the next 36 hours.
Snow totals have also climbed to 8 inches in Pennsylvania, 7 inches in Connecticut and 5 inches in New Jersey.

Cold moves to the East
The cold air will next drift East, where wind chills are expected to drop Thursday morning to minus 11 degrees in New York City, minus 1 degree in Washington, D.C, and minus 12 degrees in Boston.
The cold will even extend to the South. Wind chills are forecast to reach 10 degrees in Nashville and 23 degrees in Atlanta, where fans are gearing up for this weekend's Super Bowl.

Weekend warmth
For the hard-hit Midwest, relief will return by the weekend, when temperatures in Minneapolis and Chicago will climb back up to the 40s.
Super Bowl fans are also in luck: Atlanta is forecast to be in the 60s for the big game.

What the latest Johnson & Johnson COVID vaccine data really means
And Just Like That… Chris Noth hints Mr. Big could be heading to the ‘Sex and the City’ reboot
Family farm brings calves into the kitchen with South hit by record cold
Major winter blast coming to an end as milder temperatures move into South
Hard freeze warnings persist in the South but warmth on horizon: Latest forecast
Cold snap causes water crisis for some Mississippi residents