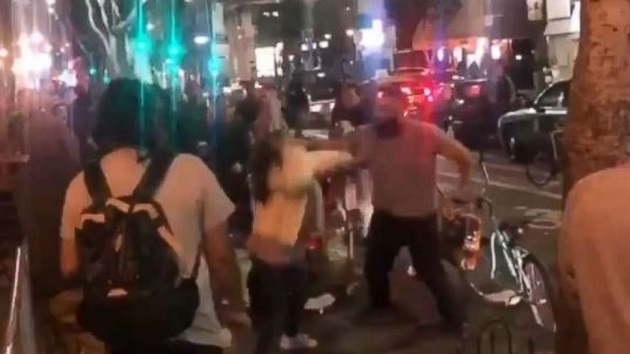 Los Angeles Police Department(LOS ANGELES) — An alleged argument over a hot dog devolved into a violent confrontation on the streets of Los Angeles on Saturday. Now, police are sharing video of the viral incident in hopes they can find the suspect.
The incident took place over the weekend on a crowded downtown Los Angeles sidewalk just after midnight near Pershing Square. Police said the incident began with the suspect fighting with the vendor at the hot dog cart before he eventually started taking swings at the women.
"There was a man that was arguing with the vendor. At that point, one of the women said, 'Hey, order your hot dog so we can get our food,'" Los Angeles police Det. Meghan Aguilar, assistant officer-in-charge of media relations, told Los Angeles ABC station KABC-TV.
"The man immediately turned, punched that woman in the face," she continued. "That punch caused the woman to lose consciousness and she fell to the ground. At that point, her friend did try to intervene and she was punched multiple times by the suspect."
The video does not show the initial argument between the customer and the vendor, but begins with the man throwing a woman in a white jacket to the ground. He then turns and punches a woman in a black shirt and black pants. He turns back to the woman in the white coat and punches her, then back to the woman in black and knocks her unconscious with one punch to the face. The woman in the white coat squares up to the man, but he decks her with a second punch and she collapses.
In total, he threw at least four punches, two at each woman.
The man can then be seen in the video running into the street and away from the scene.
Police released the cellphone footage on Tuesday, saying, "Someone knows him, and we would like to be one of those people."
The two women were taken to the hospital, treated for concussions and released.
The man is described as being about 6-foot-2 and 225 pounds. Police asked for anyone with information on the suspect to call 213-996-1851.

3 cops injured in possible explosion after being called to search vacant home: Police
Search underway for suspect in shooting of 2 deputies near Florida-Georgia border
Asian man stabbed in back in Chinatown, suspect charged with attempted murder as a hate crime
Asian man stabbed in back in New York City’s Chinatown, suspect arrested
What women need to know about fertility and COVID-19 vaccines
Biden to make 25 million masks available at community health centers, food banks