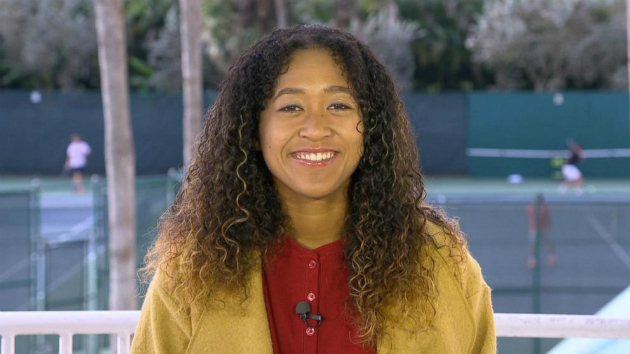 ABC News(NEW YORK) — Two-time Grand Slam champion and Australian Open winner Naomi Osaka has now had two of what she calls the "happiest moments" of her life.
"It felt really special," she said Wednesday on ABC News' Good Morning America of her Australian Open victory. "I think, well, everyone, if they win a Grand Slam, it feels like one of the happiest moments of their life."
Osaka edged Petra Kvitova 7-6 (2), 5-7, 6-4 on Saturday to win the Australian Open, her second consecutive Grand Slam title.
With the victory, Osaka rose to No. 1 in the rankings.
Though Osaka is now at the very top of her sport, she is still a 21-year-old who got tough love from her mom, Tamaki, after the Australian Open.
"My mom, she was upset at me and she kind of yelled at me to go to sleep," Osaka said. "I think that was the most important thing for her."
Osaka's sister, Mari, was so excited that she said things "I don't think I should repeat here," Osaka said.
"For me, she is like my biggest supporter in a way because we always check each other's matches and we tend to give each other therapy when we lose," Osaka said of Mari, who is also a professional tennis player.
Osaka's first Grand Slam title, the 2018 US Open, was both historic and controversial.
Osaka’s straight-set victory over Serena Williams made her the first Japanese player to win a grand slam singles title ever. During the match, Williams sparred with an umpire over a warning for coaching, being penalized first a point, then a game, before eventually losing to Osaka.
Williams was fined $17,000 after the match for a total of three code violations during her loss.
Osaka stayed focused during the controversy, something she advises other people looking to be their best to do.
"I would just say everyone has their own paths so you should just keep going and never give up and don’t compare yourself to other people," she said.