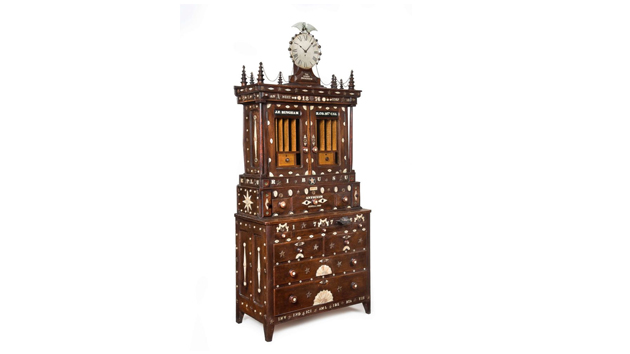 Courtesy Allan Katz Americana(NEW YORK) — Harold Gordon claimed he had a very special desk.
Described as an antique secretary desk, Gordon, from of Templeton, Massachusetts, said it was decorated and dedicated as a Civil War memorial for a Connecticut soldier who died in 1862 fighting for the Union Army at the Battle of Antietam.
Gordon told Allan Katz, a respected folk art dealer in Connecticut, that members of Connecticut’s 16th Volunteer Infantry had crafted the 8-foot walnut and oak desk in memory of John Bingham of East Haddam, according to federal prosecutors.
Gordon claimed he had purchased it from a Bingham family descendant, and told Katz that other than cleaning the desk’s vintage clock, he had done nothing else to refurbish it.
None of that was true.
On Wednesday, Gordon pleaded guilty to one count of wire fraud, and has confessed to forging the desk. He now faces up to 20 years in prison when he is sentenced in April.
Gordon “admitted that he had refurbished and decorated the desk himself, created the false narrative about the desk’s history and targeted the victim to purchase it due to the victim’s respected stature in the American folk art community,” federal prosecutors said.
“Everybody got fooled by this thing,” said Clayton Pennington, editor of Maine Antique Digest, who helped discover that the desk was a forgery.
“It’s one of the best fakes of all time,” Pennington told ABC News. “It should be in a museum now as a testament to the fake.”
Convinced of the desk’s authenticity, Allan Katz bought the piece from Gordon in 2014 for more than $64,000 and later sold it to the Wadsworth Atheneum Museum of Art in Hartford, Connecticut.
Pennington started asking questions about the piece a year ago after he saw it at The Winter Show, a respected antiques fair in New York City.
“There were several people in the trade who had been talking about it,” Pennington said. A photo of an undecorated secretary that looked similar to the supposed Civil War-era piece began circulating among antique dealers and Civil War buffs.
“That’s when I started asking questions because the physical characteristics of the plain desk matched up to the decorated desk pretty well,” Pennington said.
Pennington called Katz to inform him of his suspicions. Katz then called Gordon, who admitted he fabricated the desk’s history.
Katz has made full restitution to the museum.
“I’ll be there at the sentencing,” Katz told ABC News. “It has been a difficult journey.”

Asian man stabbed in back in Chinatown, suspect charged with attempted murder as a hate crime
Asian man stabbed in back in New York City’s Chinatown, suspect arrested
Massachusetts residents told they could wait hours or days to schedule COVID-19 vaccine appointment
Acting Capitol Police chief admits ‘internal challenges’ during Jan 6. response
Michael B. Jordan admits Chadwick Boseman’s death is what “made me cry the most this year”
75-year-old man shoved to ground at Buffalo protest files lawsuit against city, police