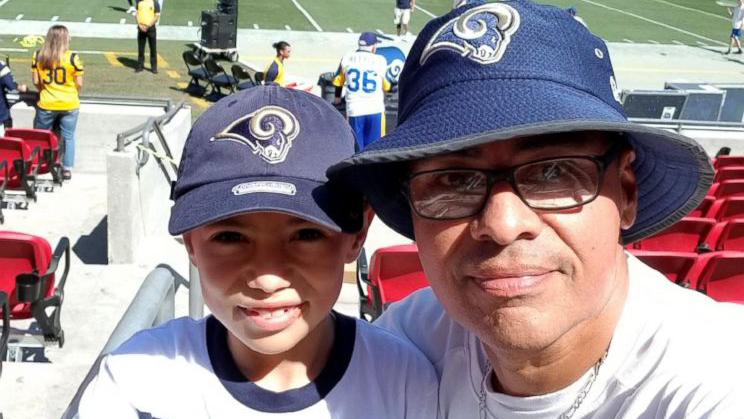 via The Los Angeles Rams(LOS ANGELES) — When the Los Angeles Rams face off against the New England Patriots this Sunday for Super Bowl LIII, the team will be cheered on by one special, devoted fan.
The Rams posted a video to Twitter on Jan. 24 of wide receiver Brandin Cooks inviting the team's custodian, Alfonso Garcia, into a room for quite a surprise: two tickets to the big game.
"On behalf of the team and the organization, we'd love to invite you and your son, Josh," Cooks told Garcia. "Come hang out with us. You mean so much to us. … You're special — what you do around here. And everything that you do does not go unnoticed."
"Oh, my God. Are you serious?" said Garcia, incredulous. "It is a dream come true."
After accepting the gift, Garcia told Cooks that since he was a little boy, he had hoped to one day be able to attend a Super Bowl.
"I get to take my son because of you guys," he said. "I don't know what to tell you. … Thank you. … This is amazing. … I am so honored."
Cooks told Garcia that the team needed to see him there in the stands, cheering them on, and reminded him that he now had to surprise his son with the news.
In a statement to ABC News on Wednesday, the Los Angeles Rams said it had provided Garcia and his son with not only two tickets to Super Bowl LIII, but also with flight and hotel accommodations for the trip.
"Having developed a close relationship with Alfonso over the past year, receiver Brandin Cooks wanted to present the surprise to Alfonso as a way to express his gratitude for the role he’s played in the team’s success this season," the team said.
"From the bottom of my heart, you know, I thank you, everybody," Garcia told Cooks in the video.