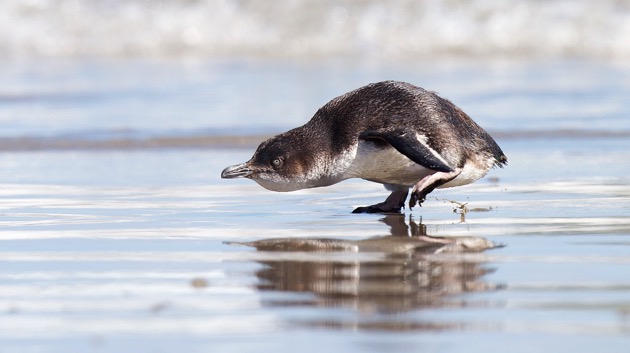 Marty Melville/AFP/Getty Images(LONDON) — Two protected little blue penguins were stolen from their burrow in a "late-night raid" in New Zealand last week, the Department of Conservation said.
Security footage showed a woman shining a light into the penguins’ nest at Perfume Point in the coastal city of Napier while two men used a crowbar to lever rocks away from the opening on Jan. 24, the DOC said in a statement. While they were being stolen, a third penguin died of a head injury in the kidnapping and was left behind at the scene on New Zealand's North Island.
It is believed the crowbar was used to hook the penguins around the neck to take them from their burrow, authorities said.
The surviving little blue penguins, known locally as korora, were then wrapped in towels and driven away in a four-door car.
Little blue penguins are a protected species, and the suspects could face imprisonment up to two years and a maximum fine of $68,000 if found guilty of interfering with the species.
Department of Conservation officer Rod Hansen said he was “really concerned” about the incident, as the authorities “believe this might not be a one off.”
“This is particularly disturbing as it is a very vulnerable time for these wee penguins/korora,” he said in a statement. “They moult from January through to March and stay in their burrows for protection. They are nocturnal animals, and the time this offence occurred in the evening, further suggests the poachers knew exactly when best to target the birds.”
Little blue penguins are the smallest species of penguin in New Zealand, according to the DOC.
Adult little penguins weigh around 2.2 pounds and grow to an average height of about 11.8 inches. Although they are spread widely along the New Zealand coast line, the population is declining and they are rarely seen during the daytime.
The DOC said that dogs are usually the greatest threat to the little penguins, however, they are often killed in traffic accidents.
The authorities have appealed for anyone with information to come forward.
“We have no idea where these birds are being taken to and we are seeking CCTV footage from the surrounding area and hoping members of the public may be able to come forward with further information,” Hansen added.
Copyright © 2019, ABC Radio. All rights reserved.