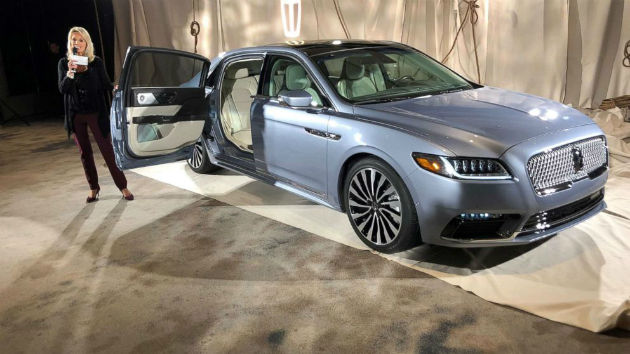 Morgan Korn/ABC News(NEW YORK) — The Lincoln Motor Company had a surprise for the automotive journalists waiting inside the 1 Hotel Brooklyn Bridge last month.
Hidden behind closed doors at the trendy new hotel in Dumbo, one of Brooklyn, New York’s hippest neighborhoods, was the 80th Anniversary Continental, a limited edition of the luxury sedan.
With a dramatic flair, the Continental was unveiled with a quick yank of a tarp. Journalists, cellphones in hand, beelined to take selfies with the gleaming blue car.
Built with coach doors and featuring a longer wheel base, all 80 units, at $110,000 a pop, sold out within 48 hours. Demand was so strong that Lincoln announced last week it would produce a second-run of the Continental Coach Door Edition for the 2020 model year.
The Continental, once the pinnacle of American luxury in the 1960s, has a dedicated fan base in China, the second largest market for Lincoln after the U.S. For Americans, however, the love affair with sport-utility vehicles only continues to accelerate. To stay competitive and relevant, Lincoln, the luxury brand owned by Ford, the No. 2 automaker in the U.S., tuned up its lineup to include more SUVs.
“Lincoln of the past was fleet cars,” Joy Falotico, president of Lincoln Motor Company, told ABC News. “In 2014 we laid out our strategy and significant investments went into new products. It’s been a four-year journey.”
That journey continues with the Aviator, a premium midsize three-row SUV that made its grand entrance at the L.A. Auto Show in November. Posting numbers that rival many of its German competitors, the Aviator, with a starting price tag of $51,100, ($87,800 for the Black Label Grand Touring edition) packs 400 horsepower and 400 lb.-feet of torque from its 3.0-liter twin turbocharged V6 engine. (The horsepower jumps to 450 and 600 lb.-ft of torque for the Aviator Grand Touring, the hybrid plug-in).
“Lincoln is very smartly focused on SUVs,” Michelle Krebs, executive analyst of Autotrader, told ABC News. “We have definitely seen a shift in the luxury market. Customers prefer SUVs to cars.”
Lincoln’s latest efforts to reclaim its top spot in the luxury market won’t end with the Aviator, she noted.
“Many people don’t consider Lincoln or Cadillac luxury brands,” she explained. “Consumer perception — that’s the struggle with Detroit brands in general. They’re not viewed as prestigious or as good as imported brands. It’s not that Lincoln is making an inferior product — it’s a matter of taste.”
Consumers in the U.S. last year overwhelmingly chose imports as their luxury vehicle of choice: Daimler took the top spot with 355,420 vehicles sold in the U.S. and BMW was a close second with 354,698.
Lincoln’s 2018 U.S. sales totaled 103,587, down 6.8 percent from 2017. Overall vehicle sales in 2018 inched up 0.5 percent to 17.2 million units.
“Lincoln being down in an up year isn’t great,” Krebs said.
Longtime automotive analyst Rebecca Lindland said drivers should give Lincoln a chance.
“I am excited about these SUVs,” she told ABC News. “The Aviator is beautiful. The Navigator is a bright spot [for the brand]. They have great technology and are definitely luxury products.”
Lindland agreed with Krebs that Lincoln suffers from a marketing crisis.
“The Navigator had become a fleet car,” she said. “These are revitalized products. Lincoln now has to reach an audience that needs and wants these vehicles.”
Falotico bristled when asked about the brand’s lackluster sales.
“We walked away from fleet deals,” she said.
“We are very disciplined in our approach growing the brand,” she added. “New products are bringing new customers to the brand.”
Younger consumers in particular are turning to the Navigator, which competes with the Cadillac Escalade.
Navigator sales rose 43.6 percent last December from 2017 and many buyers are plunking down $96,000 for the Black Label model. Navigator owners range in age from 34 to 54 years old versus 63 for the average Lincoln client.
“We’re pleased with what we’re seeing with the Navigator,” Falotico said. “Eighty percent of Navigator customers are choosing the two highest series.”
Ed Kim, vice president of industry analysis for AutoPacific, believes Lincoln can command a part of the luxury market that was abandoned by Lexus.
“Lincoln has been focusing on comfort, quiet, refinement, softness,” he noted. “There’s a segment of the young population that values comfort over performance. More automakers are trying to be sportier. But not everyone wants a BMW. Lincoln has an opportunity to capture this space and make it its own.”
In California, where Kim lives, the majority of Lincolns on the road are rental cars. That’s not likely to change in the coming weeks or months, he said.
“Transforming perception is not an overnight process,” he explained. “Product cycles are long. Lincoln has to be patient. It’s in the middle of a product renaissance.”
In addition to its latest models, Lincoln has moved away from alphanumerics for its vehicles. The Lincoln MKX SUV has been renamed as the Nautilus, just one more attempt by Lincoln executives to distinguish the brand from its luxury rivals.
Falotico said she’s excited by the feedback Lincoln has been receiving from drivers. And a lot more is coming, she promised.
“Take a look at our new designs. The powertrain is equivalent to a German automaker,” she said. “We are undergoing a brand transformation.”
Copyright © 2019, ABC Radio. All rights reserved.