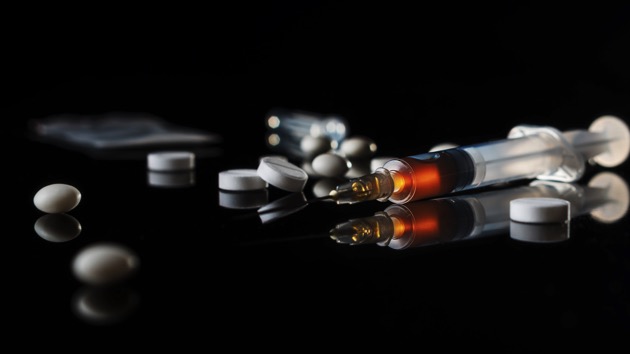 Radachynskyi/iStock(NEW YORK) — A growing number of people are having strokes and new research suggests the spike is connected to the opioid epidemic sweeping across the nation.
While some people might not typically associate strokes with opioid use, the researchers wrote in their study that heroin, which is commonly injected, can cause stroke in a variety of ways, including by introducing bacteria into the bloodstream via dirty needles or by lubricating the needles with saliva and by causing damage to the heart's tissue with repeated use.
The aforementioned practices combined with a rise in heroin use "may explain why opioid-related [infective endocarditis] is becoming more prevalent and leading to complications, such as stroke and death," the report said. Infective endocarditis (IE) occurs when bacteria attach to damaged parts of the inner lining in the heart's valves, causing infection, according to Mayo Clinic.
The findings "suggest that people need to be more aware that stroke can be a devastating complication of injection opioids," said Setareh Salehi Omran, a fellow in vascular neurology at the Weill Cornell Medical Center and Columbia University Medical Center and lead author of the study, in an interview with ABC News.
The American Heart Association released the report's abstract on Wednesday but the findings will be published next week as they are presented at the AHA's conference in Hawaii.
The research found that the number of hospitalizations for stroke associated with IE and opioid use went from 2.4 incidents per 10 million patients in 1993 to 18.8 incidents per 10 million patients in 2015.
Notably, there was "no significant change" in hospitalization rates between 1993 and 2008, but between 2008 and 2015, "the rates significantly increased," the report said.
The timing of this increase coincided "with the emergence of the opioid epidemic," the report said.
The rates of hospitalizations for stroke associated with IE and opioid abuse during that time frame spiked among non-Hispanic white patients. The researchers also found increases among people under 45 years old, men and those in both the Northeast and South.
Copyright © 2019, ABC Radio. All rights reserved.