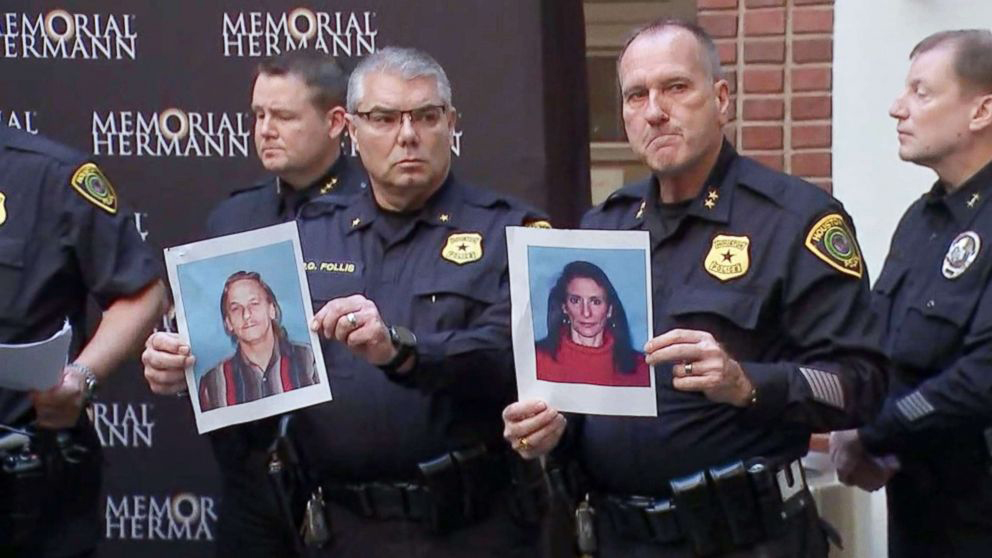 KTRK-TV(HOUSTON) — A 58-year-old woman was among of pair of suspects shot dead by undercover police during a raid on a suspected Houston drug house that left five officers injured, including two who were shot in the face, officials said Tuesday.
Two of the wounded officers remained in critical but stable condition Tuesday at Memorial Hermann Hospital in Houston.
"We're very concerned about one," Houston Police Chief Art Acevedo said during a news conference at the hospital. "While he's stable, we just asked for prayers. He's in for a fight."
Acevedo identified the two suspects who were shot and killed during the raid as 58-year-old Rhogena Nicholas and 59-year-old Dennis Tuttle.
He did not identify the injured officers but said they are all veterans of the Houston Police Department and range in age from 32 to 54.
He said that four officers suffered gunshot wounds and a fifth officer sustained a serious knee injury that required surgery.
Acevedo said the drug raid on the southeast Houston home stemmed from numerous complaints from neighbors. He said undercover officers had previously made two purchases of black tar heroin from drug dealers at the house.
Armed with a search warrant, nine narcotics detectives backed up by at least six patrol officers surrounded the home on Harding Street just before 5 p.m. on Monday.
After a 54-year-old officer, the lead investigator on the case, broke open the front door, a 33-year-old officer armed with a shotgun entered the residence and was immediately attacked by a pit bull, Acevedo said.
He said that the officer being attacked shot and killed the dog.
One of the suspects, Tuttle, charged from the back of the house firing a .357-caliber Magnum revolver at the officer, hitting him in the shoulder.
"He went down and fell on the sofa in the living room," Acevedo said the wounded officer. "A female suspect went towards that officer, reached over the officer and started making a move for his shotgun."
Another officer who entered the house was allegedly shot by Tuttle.
Acevedo said officers opened fire killing Nicholas and engaged in a gun battle with Tuttle.
He said the lead investigator who breached the door, entered the house and was also shot.
"After we had two officers down and another shot, the remaining officers … started laying down cover fire, left positions of cover themselves and, I believe, they heroically pulled their fellow officers out of harm's way," Acevedo said.
He said Tuttle followed the retreating officers to the front door and continued to fire at them before he was shot and killed.
Police recovered two shotguns and three rifles from the residence and seized marijuana and a white powder they believe to be either cocaine or the powerful synthetic opioid fentanyl, Acevedo said.
He said it was the third time in 25 years that the 54-year-old lead investigator on the case had been shot in the line of duty. He said the officer was previously shot in 1992 and again in 1997.
"He's a big teddy bear," Acevedo said to the officer. "He's a big African-American, strong as an ox, tough as nails. The only thing bigger than his body in terms of stature is his courage. I think God had to give him a big body just to be able to contain his courage."
While visiting the lead investigator at the hospital on Tuesday — Acevedo said — the wounded man passed a note to a colleague that read, "I had to get in there because I knew my officers were down."
He said at least four other officers opened fire during the firefight with Tuttle. They have all been placed on paid administrative leave while the incident is under investigation.
Acevedo declined to discuss the criminal backgrounds of Tuttle and Nicholas, saying that will be part of the investigation.
He also said police are investigating electronic surveillance in the home that might have tipped off the suspects to the raid in progress.
"A lot of drug houses have surveillance systems that are better than businesses," Acevedo said.
He said the shooting again proves just how dangerous law enforcement work can be.
"We know that we live in a society where there's a proliferation of firearms, where you can assume there will be firearms at just about every location that you hit," Acevedo said. "Unfortunately, some people just don't have respect for the sanctity of life."
On Monday evening, the president of the Houston Police Officers Union, Joe Grimaldi, said he was "sick and tired of having targets on our back."
"We are sick and tired of having dirtbags trying to take our lives when all we're trying to do is protect this community and protect our families," Gamaldi said during an emotional news conference.
They offer a lot of prayers, but we didn't elect people to pray for us. We elect people to lead us. We elect people to make public policy decisions. So to the elected officials, I appreciate your prayers but quite frankly we've got a community that prays for us.
“If you're the ones that are out there spreading the rhetoric that police officers are the enemy, just know we've all got your number now, we're going to be keeping track of all of y'all, and we're going to make sure that we hold you accountable every time you stir the pot on our police officers," Gamaldi said. "We’ve had enough, folks. We're out there doing our jobs every day, putting our lives on the line for our families."
Acevedo said Tuesday that he understands Gamaldi's frustration.
He described gun violence in America as "a public health epidemic" and said it is up to elected officials to finally get serious about tackling the problem.
"They offer a lot of prayers, but we didn't elect people to pray for us. We elect people to lead us. We elect people to make public policy decisions," Acevedo said. "So to the elected officials, I appreciate your prayers but quite frankly we've got a community that prays for us."