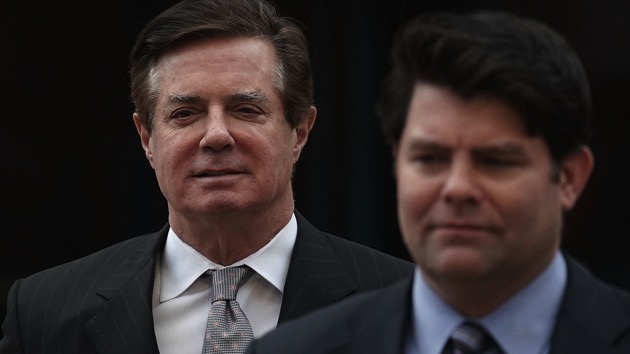 Alex Wong/Getty Images(WASHINGTON) — A dispute between special counsel Robert Mueller and President Donald Trump’s embattled campaign chairman Paul Manafort over allegations he breached his plea deal has led a federal judge to postpone his sentencing in Virginia, where he was already convicted on a raft of tax-related charges.
Manafort was scheduled to be sentenced Feb. 8 — with several of the Virginia charges having been dropped as part of his cooperation deal with the special counsel. Monday’s decision to delay the sentencing reopens the possibility that prosecutors may wish to pile more years onto an already hefty prison term Manafort is facing.
At a hearing last week in Washington special counsel prosecutor Andrew Weissman said that while there was no current plan to bring additional charges against Manafort, he did say the special counsel wants "to reserve that ability."
The government brought two separate cases against Manafort, who served five months as Trump’s campaign chairman in 2016. Prosecutors brought charges in both Virginia and in the District of Columbia.
A Virginia jury found him guilty on eight counts of financial crimes in August. That jury was unable to reach a verdict on 10 additional counts.
The next month, Manafort signed a plea agreement to settle additional felony charges looming against him in Washington. As part of that deal, Manafort agreed to acknowledge guilt for the 10 pending counts in Virginia, and prosecutors agreed not to try him for those charges.
Late last year, Manafort's plea agreement began to fall apart. Special counsel prosecutors alleged Manafort had lied to FBI investigators and run afoul of a plea deal that required his full, truthful cooperation. Manafort's defense team has disputed that claim, saying he did not intentionally mislead investigators.
Last week, when the two sides met in court to debate whether Manafort broke his plea agreement, special counsel prosecutors said the government no longer needed to uphold its end of the plea deal.
The judge in Manafort's Virginia case said Monday he wanted to wait for the judge in Washington to determine if Manafort broke his deal because that ultimately "may have some effect on the sentencing decision" in Virginia.
Copyright © 2019, ABC Radio. All rights reserved.