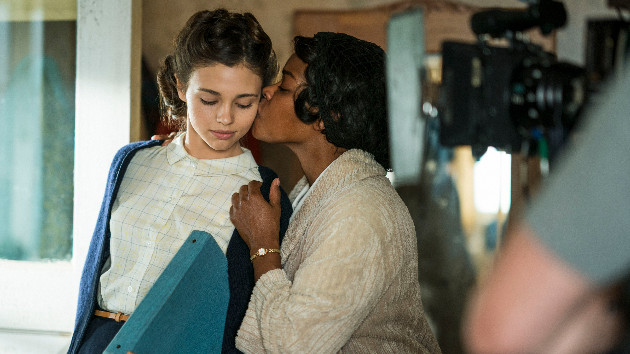 She stars as Fauna Hodel, a teenage girl adopted at birth whose mission to find out her true identity ends up uncovering some dark family secrets that may or may not be connected to the infamous Black Dahlia murder.

The first episode, airing tonight, focuses on Fauna’s tumultuous relationship with her adoptive mother, Jimmie Lee, who's determined to keep Fauna in the dark about her real family.

“Jimmie Lee and Fauna they — in real life, as well — they really loved and cared about each other but… they just butted heads because they couldn't really communicate that well,” Eisley tells ABC Radio. “And so there was a lot of frustration mixed with love.”

They have a complex dynamic on-screen, but Eisley says actress Golden Brooks, who plays Jimmie, was easy to work with. Brooks agrees, saying they hit it off almost immediately.

"From the moment I met her — we had a sit down, sort of coming of the minds — after I booked the job," Brooks tells ABC Radio. "…And we just kind of got to mold into each other."

Unlike Fauna and Jimmie, Eisley’s relationship with her own mom – actress Olivia Hussey — is way more functional. She says her mom has always been supportive of her acting dreams.

“I think honestly she's just purely a great mother, so whatever profession made me happy she would've supported,” Eisley says. “But I think she loves seeing that I'm working and…things are going relatively well.”