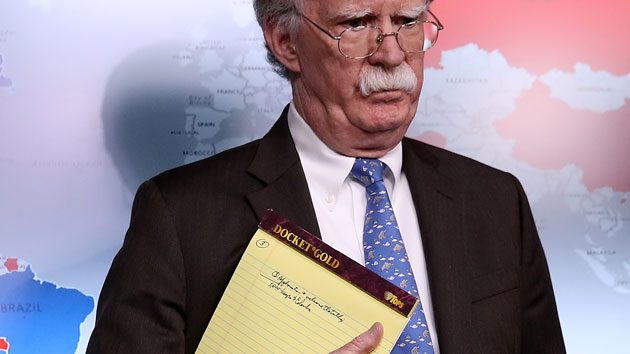 Win McNamee/Getty Images(WASHINGTON) — While briefing about new oil sanctions on Venezuela, President Trump's National Security Adviser John Bolton caused a stir Monday when he held a note pad in front of the media at the White House with some scribbled text: "5,000 troops to Colombia."
Had he inadvertently tipped off the world to a U.S. invasion, or was it a clever bit of psychological operations to send a strong message to Venezuela's Nicolás Maduro? Or something else entirely?
The Trump administration has recognized the opposition leader Juan Guaidó as interim president and tightened the screws in recent days to force Maduro, who has overseen a political crackdown, consolidation of power, and economic collapse, out of power.
But with Maduro holding onto his office, there's concern the U.S. could take more muscular action to force Maduro out, including military force. President Donald Trump himself has publicly floated a military intervention, which Sen. Lindsey Graham, R-South Carolina, a confidante, said he has done again in recent weeks, according to Axios.
In response to questions about Bolton's notes, a National Security Council spokesperson told ABC News, "As the President has said, all options are on the table."
But the Acting Defense Secretary said it's not something Bolton had raised with him — and Bolton, who's spent decades in the media spotlight and worked at Fox News before joining the administration, is very media savvy.
"I haven't discussed that with Secretary Bolton," Acting Secretary Patrick Shanahan, who took over after James Mattis resigned in December, told reporters Tuesday.
Shanahan would not rule it out, instead repeating that he and Bolton hadn't discussed it and adding, "I'm not commenting on it."
The U.S> military has been involved in supporting, monitoring, and watching the situation in Venezuela "very carefully," Shanahan said,
That means giving Bolton and the National Security Council options and supporting policy development, but a U.S. official told ABC News on Monday, "We're not seeing anything that would support that number."
Colombia, which borders Venezuela and has been flooded by over one million Venezuelan refugees, was also caught unaware of any plans. Foreign Minister Carlos Holmes Trujillo Garcia released a statement that said, "The extent and reason of said note is unknown."
Copyright © 2019, ABC Radio. All rights reserved.