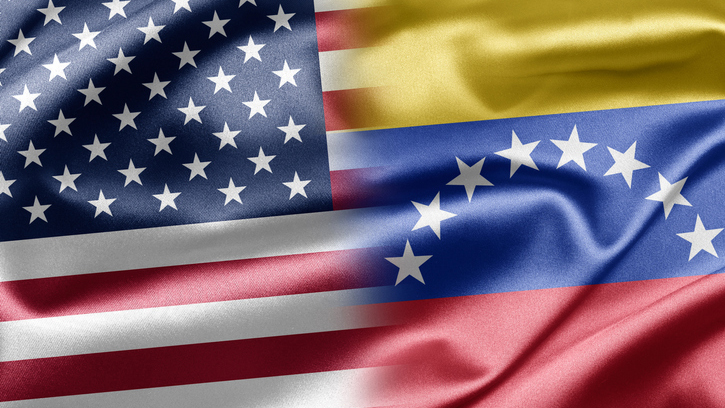 Ruskpp/iStock(WASHINGTON) — Venezuela's President Nicolás Maduro is open to talks with President Donald Trump, his foreign minister, Jorge Arreaza, said Monday.
There was no immediate public response from the White House.
While the U.S. has recognized opposition leader Juan Guaidó as Venezuela's interim president, Maduro's government has tried to reassert its authority and prove that the U.S. is still working with Maduro's faction.
That may become even more difficult in the days to come, as the Trump administration considers giving Guaidó's government access to Venezuela's financial assets overseas.
The administration has declined to comment on any potential future plans, but a Treasury spokesperson said in a statement Friday that the U.S. "will use its economic and diplomatic tools to ensure that commercial transactions by the Venezuelan Government, including those involving its state-owned enterprises and international reserves, are consistent with this recognition" of Guaidó as interim president.
Guaidó has called for this financial move, which would undermine Maduro, who maintains the loyalty of Venezuela's military top brass but could be left unable to pay them. While a handful of military and diplomatic officials have sworn allegiance to Guaidó in the last week, losing access to Venezuela's coffers could unleash a wave of defections.
In a press conference Monday, Arreaza asserted that the U.S. continues to have diplomatic relations with Maduro's government after recognizing Guaidó, even reading some of the diplomatic notes the U.S. has set and showing a photo of U.S. Chargé d'Affaires Jimmy Story's meeting with the Vice Chancellor on Saturday.
"Diplomatic relations are not simply about statements," he added.
Chargé Story is one of a handful of American diplomats still in Venezuela after the State Department ordered the evacuation of non-emergency staff and families out of concern for their safety. Last Wednesday, Maduro had ordered the U.S. to remove all its diplomats within 72 hours, but Secretary of State Mike Pompeo said the U.S. would not obey the order because Maduro was the "former" president and his commands were "illegitimate."
That set up a showdown by Sunday morning, with National Security Adviser John Bolton threatening action: "Any violence and intimidation against U.S. diplomatic personnel, Venezuela's democratic leader, Juan Guiadó, or the National Assembly itself would represent a grave assault on the rule of law and will be met with a significant response," he tweeted.
But Maduro backed down, suspending his order and giving the U.S. 30 days to negotiate or withdraw its remaining personnel. Arreazza added Monday that all Venezuelan diplomats had left the U.S. and the U.S. should also respect the 30-day deadline, too.
A handful of senior military and diplomatic officials, however, have not departed, instead defecting to join Guaidó's fledgling government, which has promised amnesty to anyone in the military who disavows Maduro and even floated it for Maduro himself.
Col. José Luis Silva, the military attaché at the Venezuelan Embassy in Washington, announced he was breaking with Maduro in an interview with the Miami Herald on Saturday, adding, "My message to all armed forces members, to everyone who carries a gun, is to please let's not attack the people. We are also part of the people, and we've had enough of supporting a government that has betrayed the most basic principles and sold itself to other countries."
On Sunday, another senior official joined him — the deputy chief of the Venezuelan consulate in Miami, Scarlet Salazar — posting in a video online where she added, "This decision abides by my democratic principles and values as a career diplomatic officer serving Venezuela for more than 18 uninterrupted years."
The State Department announced its own staffing changes Friday, bringing on Elliott Abrams as a special envoy for Venezuela. Abrams was an Assistant Secretary of State under President Reagan and a Deputy National Security Adviser to President George W. Bush, making him a controversial choice for his role in Reagan's support for Latin American dictatorships, his cover-up of the Iran-Contra affair, and his support for the Iraq War. Abrams pleaded guilty to two misdemeanors for withholding evidence to Congress, but was later pardoned by George H.W. Bush.