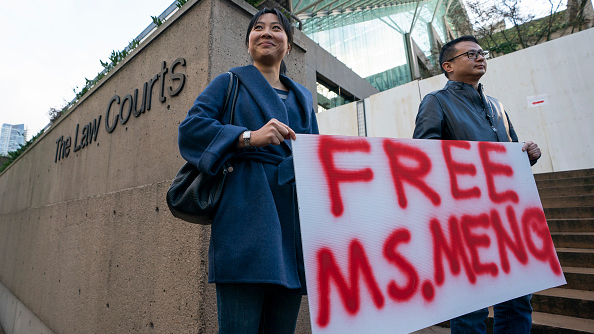 Rich Lam/Getty Images(WASHINGTON) — A 13-count indictment has been unsealed in federal court in Brooklyn criminal charging four defendants — Huawei Technologies, two Huawei affiliates — Huawei Device USA and Skycom Tech — and Huawei’s chief financial officer, Meng Wanzhou, top Justice Department and other administration officials announced Monday.
Huawei and Skycom are charged with bank fraud and conspiracy to commit bank fraud, wire fraud and conspiracy to commit wire fraud, among other charges. Huawei and Huawei USA are charged with conspiracy to obstruct justice related to the grand jury investigation in Eastern District of New York. Meng is charged with bank fraud, wire fraud, and conspiracies to commit bank and wire fraud, Acting Attorney General Matt Whitaker said at a DOJ news conference.
The charges relate to an alleged long-running scheme by Huawei, its CFO and other employees to deceive numerous global financial institutions and the U.S. government regarding Huawei’s business activities in Iran, officials said.
"The charges unsealed today clearly allege that Huawei intentionally conspired to steal the intellectual property of an American company in an attempt to undermine the free and fair global marketplace," said FBI Director Christopher Wray. “To the detriment of American ingenuity, Huawei continually disregarded the laws of the United States in the hopes of gaining an unfair economic advantage."
The Chinese telecom company Huawei has been at the center of U.S.-Chinese tension in recent months. In December 2018, Meng was arrested in Canada. The arrest came at the request of the United States.
Meng’s arrest stems from a warrant issued in New York on Aug. 22 for alleged fraud offenses dealing with Skycom Tech and Huawei regarding dealings with Iran. She was arrested while traveling from Hong Kong to Mexico via Canada. She faces extradition to the United States.
She was released on bail shortly after her arrest, and remains on house arrest in Canada and has a court appearance on Feb. 6.
The company said it was not aware of any wrongdoing by Meng, the daughter of the company's 74-year-old founder, Ren Zhengfei. Huawei also noted that it hadn't violated any U.S. sanctions. Meng is awaiting extradition to the United States, and China demanded that the United States drop the request.
According to the indictment, in 2012 Huawei began a concerted effort to steal information on a T-Mobile phone-testing robot dubbed “Tappy.” In an effort to build their own robot to test phones before they were shipped to T-Mobile and other wireless carriers, the DOJ said in a news release, Huawei engineers violated confidentiality and non-disclosure agreements with T-Mobile by secretly taking photos of “Tappy,” taking measurements of parts of the robot, and in one instance, stealing a piece of the robot so that the Huawei engineers in China could try to replicate it.
After T-Mobile discovered and interrupted these criminal activities, and then threatened to sue, Huawei produced a report falsely claiming that the theft was the work of rogue actors within the company and not a concerted effort by Huawei corporate entities in the United States and China, according to the DOJ release.
Officials said emails obtained in the course of the investigation reveal that a conspiracy to steal secrets from T-Mobile was a company-wide effort involving many engineers and employees within the two charged companies.
As part of its investigation, the DOJ release said, FBI obtained emails revealing that in July 2013, Huawei offered bonuses to employees based on the value of information they stole from other companies around the world, and provided to Huawei via an encrypted email address.
Monday's charges come amid a U.S.-China dispute over tariffs, but the arrest of Meng — and now the charges — raised the tension to a higher level.
Trump has also been locked in an escalating tariff war with China in recent months, though the U.S. put a pause on a Jan. 1 tariff increase as the two countries try to work out a new trade deal.
“If I think it’s good for what will be certainly the largest trade deal ever made — which is a very important thing — what’s good for national security — I would certainly intervene if I thought it was necessary,” Trump told Reuters in December.
At a Senate panel in December DOJ's top national security lawyer said the Justice Department isn't in the business of trade policy.
“We are not a tool of trade when we bring the cases,” Assistant Attorney General John Demers told a Senate panel.
“What we do at the Justice Department is law enforcement. We don’t do trade,” he added.
Her arrest infuriated the Chinese who in turn arrested two Canadians.
Chinese state media have accused the United States of "hooliganism."
“One thing that is undoubtedly true and proven is the U.S. is trying to do whatever it can to contain Huawei’s expansion in the world simply because the company is the point man for China’s competitive technology companies,” the editorial, reported by the Guardian, said.
Huawei became the largest telecommunications equipment manufacturer in the world in 2017 — knocking Ericsson out of the top spot, according to a congressional report issued in November called the U.S.-China Economic and Security Review.
The U.S. defense bill, signed by Trump in August, prohibits the federal government from procuring or obtaining, as well as entering into, extending or renewing a contract with an entity that uses telecommunications equipment or services produced by Huawei.