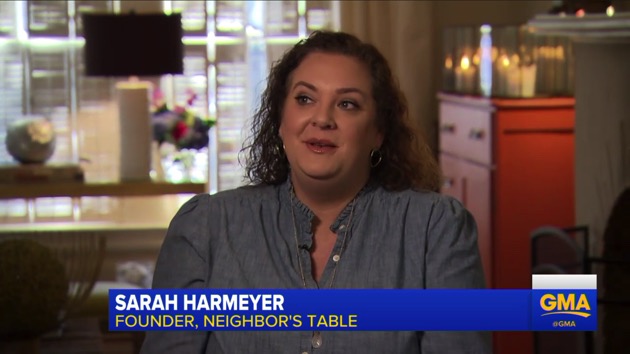 ABC News(DALLAS) — Although Sarah Harmeyer is the CEO of “Neighbor’s Table” – she may ask you to call her by her preferred title “Chief People Gatherer.” After all, Neighbor’s Table, a Dallas-based company that builds and sells handcrafted tables across the U.S. – is not actually a business about tables.
"People think we’re in the table business, but we’re really in the people business," Sarah Harmeyer explained to ABC News. "It’s about the people sitting around the table – and the connections and friendships created by gathering together over a meal."
It all started in 2012 after Harmeyer moved to Dallas, Texas, for a new job. "I only knew two neighbors at the time, and I wanted to get to know my community," Harmeyer shared.
Her idea to break the ice? Break bread with her new neighbors.
"When I started thinking about the very best moments of my life I thought about the table," Sarah said. "I loved creating experiences for people at the table and I thought that’s what I want to do. I want to be intentional about gathering people."
The problem? Harmeyer didn’t have a table. So she asked her dad to build her one – large enough to seat 20 people. She placed it in her backyard and starting inviting her neighbors via the Nextdoor app.
Nextdoor is a free social networking site that connects neighbors to one another within a certain radius. "Nextdoor really helped me make that first connection," Harmeyer explained. "I invited people to RSVP on our Nextdoor site – but nobody RSVPs anymore. I was expecting maybe 30 people and over 90 showed up! Having a potluck was the most brilliant idea."
After the success of her first "gathering," Harmeyer set a goal to invite 500 people that year to her backyard table, one dinner party after another. After meeting her goal by Thanksgiving, she soon set her sights on a new plan.
"I had a friend who called me about a year and a half in [of gathering] and said, 'Sarah I think you’re on to something, I wonder if there is something outside your own backyard' Harmeyer shared. "I thought there must be other people wired like me, other 'people gatherers' and I wonder if I could cheer those people on. I wonder if they need a home base like I did. I wonder if they need a table."
Harmeyer and her father launched "Neighbor’s Table" in 2013 to help other soon-to-be hosts connect with their community. "We spell it [Neighbor’s Table] with an apostrophe because I think the table belongs to each individual person that sits there… its an experience we get to create together."
To date, Harmeyer says they’ve sold over 200 tables to families across the U.S.
"I physically deliver each table by myself," Harmeyer shared. "Its a super inefficient way of doing business but it’s super fun and it’s all about people to me."
And the parties leave a lasting impact on the attendees, too. "When you sit around people at the table and start laughing and sharing stories, you realize you are more alike than you are different," Diane Brouillard, who attends the gatherings at Harmeyer's, explained to ABC News. "When I leave, I kind of feel alive with new perspectives and new ideas and hopefully new friendships."
At the heart of the business is Harmeyer's simple, but extraordinary idea that "good things happen when you lean in and share a meal with people."
"There’s not a big business plan behind this," Harmeyer said. "My own neighbors don’t even know 'Neighbor’s Table' is a thing, they just think I’m the party girl with the big table in my yard, which I actually love."