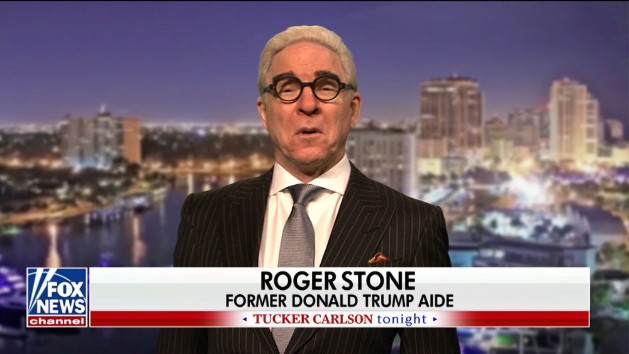 SNL(NEW YORK) — Steve Martin made a surprise cameo as recently indicted Donald Trump adviser Roger Stone in the cold open to this week's Saturday Night Live, pleading that he was "just a poor, helpless man," and asking for a pardon from the president.

The 73-year-old Martin, a touch older than the 66-year-old Stone, appeared on a faux episode of Fox News' Tucker Carlson Tonight to discuss his indictment Friday by special counsel Robert Mueller.

"Here is a guy you see and instantly think: I trust this guy," said Carlson, played by SNL's Alex Moffat.

Carlson said he'd been indicted on seven counts, to which Stone replied, "It was four counts…OK, I'm lying! Seven felonies, I can't even count that high!"

Martin as Stone also said he's starting a legal defense fund, since people have been yelling "hey Roger, go fund yourself!" at him so much.

Kate McKinnon also made a hilarious appearance earlier on the faux Tucker Carlson Tonight as Commerce Secretary Wilbur Ross, adding to her cross-gender impressions of Jeff Sessions and Lindsey Graham.

Ross, who made what many perceived as insensitive comments during the shutdown by saying furloughed workers should take out bridge loans to pay their bills, encouraged viewers to sell a "lesser Picasso" to raise money for expenses.

Martin was never a cast member on SNL but he's hosted the show 15 times, second only to Alec Baldwin. He's appeared as a guest more than 10 other times.