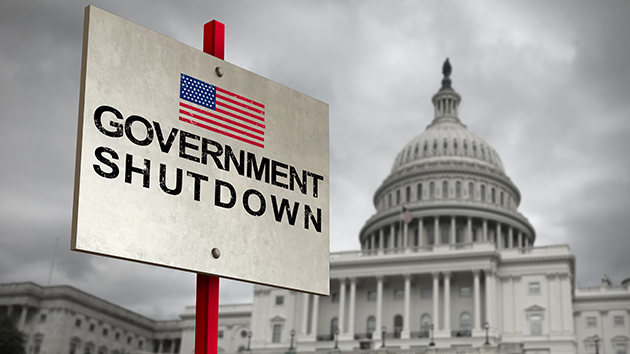 wildpixel/iStock(WASHINGTON) — The nonpartisan Congressional Budget Office estimates that the longest-running government shutdown in U.S. history came at a price: costing the economy $11 billion with $3 billion that will never be recovered, according to a report released Monday.
For the fourth quarter of 2018, CBO estimates real gross domestic product was reduced by $3 billion compared to what it would have been. The level of real GDP for the first quarter of 2019 is estimated to be $8 billion lower, due to a combination of the partial government shutdown delaying approximately $18 billion in federal spending, suspending services for federal workers and a reduction in demand lowering output in the private sector.
"Risks to the economy were becoming increasingly significant as the shutdown continued," the report reads. "Although their precise effects on economic output are uncertain, the negative effects of such factors would have become increasingly important if the partial shutdown had extended beyond five weeks."
While CBO anticipates a majority of the lost real GDP will be recovered, about $3 billion will not be. That's about 0.02 percent of the projected annual GDP in 2019, according to the report.
"Among those who experienced the largest and most direct negative effects are federal workers who faced delayed compensation and private-sector entities that lost business," the report says. "Some of those private-sector entities will never recoup that lost income."
In the wake of the report's release, Senate Minority Leader Chuck Schumer called for an end to President Donald Trump's shutdowns.
"As the dust settles from the Trump Shutdown, it is clear as day that the president’s temper tantrum caused serious and lasting damage to our nation's economy," Schumer said in a statement. "If President Trump didn't appreciate the error of his ways after seeing the human suffering his needless shutdown caused, maybe the extensive economic damage he inflicted will set the president straight: No more Trump Shutdowns."
CBO's report analyzing the shutdown's effects came just days after the financial rating agency Standard & Poor's analyzed the cost of the partial government shutdown on the economy and found it added up to at least $6 billion — more expensive than the $5.7 billion Trump wanted for the border wall.
About 800,000 federal workers were furloughed or required to work without pay during the historic shutdown. On Friday, Trump signed legislation to reopen the government for three weeks, until Feb. 15.
"The weekly compensation costs for workers at agencies that were without an appropriation totaled roughly $1.8 billion, or about 40 percent of total compensation for federal workers," the report says.
Trump said federal employees, who were on track to miss their second paycheck Friday, would receive back pay "very quickly, or as soon as possible. It'll happen fast."
Not only will compensation be affected, but so will tax revenues, CBO predicts.
"…As a result of some reduced activities by the Internal Revenue Service (IRS) that are meant to ensure taxpayers' compliance with tax law, CBO estimates that tax revenues will be roughly $2 billion lower in fiscal year 2019 because of the shutdown," the report says.
CBO said uncertainty surrounded its report, particularly regarding the shutdown’s effects on federal compensation, due, in part, to the fact that the number of furloughed federal workers fluctuated over the course of the shutdown.
If the shutdown had stretched longer than five weeks, it may have further diminished consumer spending because of interruptions to federal assistance programs, like the Supplemental Nutrition Assistance Program, known as SNAP, the report says. Food stamp recipients received full benefits for February amid the shutdown.
"Although CBO did not observe a significant drop-off in grants, subsidies, or other payments made to individuals during the five-week shutdown, a longer shutdown would probably have disrupted those payments," the report says.
Copyright © 2019, ABC Radio. All rights reserved.