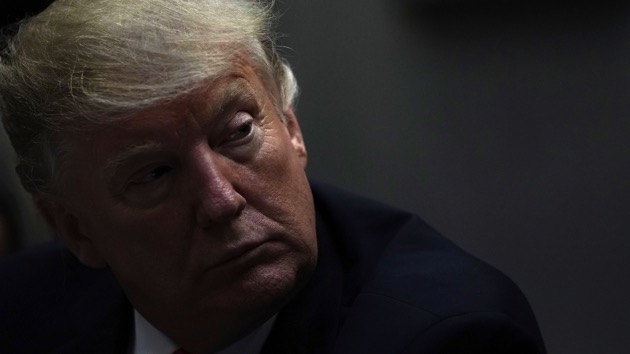 Alex Wong/Getty Images(NEW YORK) — Two years into Donald Trump’s presidency and after a month-plus partial shutdown, a wide deficit of confidence marks public views of the government in Washington: Americans give poor marks to Trump’s work across a range of issues – yet broadly mistrust the opposition as well.
Only 35 percent in this ABC News/Washington Post poll express confidence in Trump to make the right decisions for the country’s future; 64 percent don’t trust him in this central task. But it’s no better for the Democrats in Congress: 34-65 percent; House Speaker Nancy Pelosi: 30-62 percent; or the Republicans in Congress: 30-69 percent.

See PDF for full results, charts and tables.
That said, Trump leads the pack in negative intensity: Nearly half of Americans — 48 percent — say they have no confidence “at all” in the president compared with 37 percent who say that about Pelosi. Thirty percent have no confidence in Republican lawmakers in Congress versus 29 percent for the Democrats.
The poll, produced for ABC by Langer Research Associates, finds Trump underperforming the tepid expectations that greeted him when he took office. In the biggest gap, 50 percent of Americans expected him to do a good job handling the deficit; just 33 percent say he’s in fact doing so, a 17-point deficit. He likewise trails expectations by 12 percentage points on handling the economy, 11 points on health care and four to nine points on a range of other issues.
Trump’s challenges extend to his personal ratings as well. Just 32 percent see him favorably as a person (59 percent unfavorably), a scant 2 points from Bill Clinton’s record low favorability at the height of the sex scandal that led to his impeachment.
Even then, Clinton’s job approval at the time was 64 percent. Trump’s is 37 percent, as reported Friday, the lowest on record for a president at this point in office in polls back 72 years.
The public divides about evenly on whether Trump is a strong leader – then goes sour on other scores. Majorities from 56 to 65 percent rate him negatively on having brought “needed change” to Washington, having the right personality and temperament for the office, being a good political dealmaker, being honest and trustworthy and understanding the problems of people like them.
That last item, empathy for others, can provide cushioning for a politician when the chips are down, as it did for Clinton and Barack Obama alike. Numerically, it’s Trump’s weakest attribute.

Groups
Demonstrating the importance of perceived empathy, among those who think Trump understands their problems, 91 percent also approve of his work in office, compared with just 9 percent of those who don’t think he understands them.
Still, even parts of his base find Trump unlikable: 29 percent of evangelical white Protestants, 24 percent of strong conservatives and 22 percent of Republicans see him unfavorably as a person. Unfavorably soars, of course, among his political detractors.

Methodology
This ABC News/Washington Post poll was conducted by landline and cellular telephone Jan. 21-24, 2019, in English and Spanish, among a random national sample of 1,001 adults. Results have a margin of sampling error of 3.5 points, including the design effect. Partisan divisions are 32-24-37 percent, Democrats-Republicans-independents.
The survey was produced for ABC News by Langer Research Associates of New York, N.Y., with sampling and data collection by Abt Associates of Rockville, Md. See details on the survey’s methodology here.
Readers are welcome to subscribe to the Langer Research Associates email distribution list.
Copyright © 2019, ABC Radio. All rights reserved.