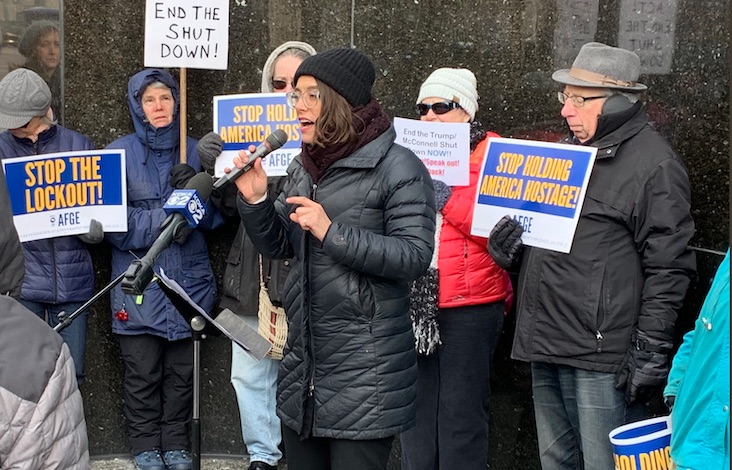 PITTSBURGH – Unionized workers say everyone will suffer consequences from the longest government shutdown in history, and that some of those out of work will never be paid.

Members of SEIU Local 32-BJ rallied outside the Pittsburgh office of Sen. Pat Toomey, R-Pa., on Tuesday, demanding that he support a vote to end the month-long partial government shutdown.

Some 800,000 government workers who aren’t being paid eventually will get paychecks, but Sam Williamson, the union’s district director in western Pennsylvania, said nearly 600 SEIU members working for government contractors in Washington, D.C., and New York will never be paid for the lost work time.

“Unlike direct federal employees who, in past shutdowns, have always received back pay for the time that they’ve lost,” he said, “that’s never been the case for contracted workers.”

At issue is the Trump administration’s call for building more miles of wall on the U.S./Mexico border, which the president has called a matter of national security. Opponents have said it would not prevent undocumented immigrants from entering the country.

Williamson maintained that, contrary to Trump administration claims, immigrants aren’t the ones damaging the economy.

“Donald Trump and Sen. Toomey, and the rest of the Republican Party, are now actually inflicting great damage on Pennsylvania workers and the Pennsylvania economy through this shutdown that is putting hundreds of thousands of people out of work and depriving many more of services that they depend on,” Williamson said.

The Center for American Progress reported that in Pennsylvania alone, more than 2,000 workers employed by the U.S. Department of Agriculture, Environmental Protection Agency and Interior Department are furloughed or working without pay.

Williamson said the message they delivered to Toomey at Tuesday’s rally is simple and clear.

“Get on the right side of history,” Williamson said, “and stand with those workers and the American people, who don’t want this needless wall and want our government to reopen, so people can get back to work and back to business.”

Information on Pennsylvania shutdown effects is online at cdn.americanprogress.org.