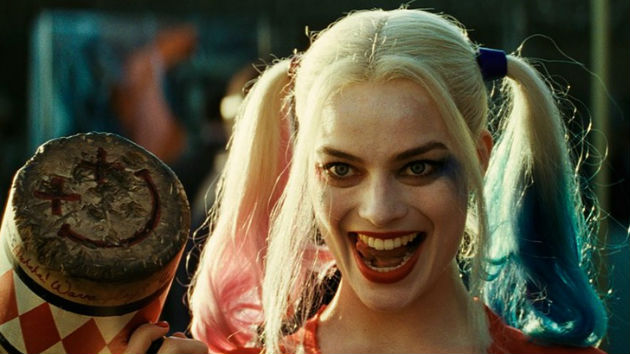 Clay Enos/TM & © DC Comics(LOS ANGELES) — The morning after appearing at the Screen Actors Guild Awards as a nominee for Mary, Queen of Scots, Margot Robbie teased fans with the return of one of her most beloved characters — and hours later, offered a glimpse of her in action…sort of.

Captioning the photo "Miss me?" Robbie appeared on Instagram in costume as Harley Quinn — her cute, crazed character from Suicide Squad — in a behind-the-scenes snap of the upcoming spin-off Birds of Prey.

In the pic, we can see Harley has ditched the look that launched a million cosplays: Instead of her blue and pink Suicide Squad pigtails, she's shown with her character's bleached-blonde locks cut into a bob, with sloppily chopped bangs.

She's wearing a tube top with colorful fringes, and around her neck, a dog collar with a dog tag reading "Bruce"…Obviously a reference to Batman's alter-ego, Bruce Wayne.

Later in the day, a funky teaser for the film hit the Internet, which shows Harley laughing as she drinks from a margarita glass — and momentary glimpses of the other characters. "See you soon!" then splays across the screen.

The movie — which will center on Harley and fellow Gotham City sirens Huntress, played by Mary Elizabeth Winstead, and Black Canary, who will be played by Jurnee Smollett-Bell — will also star Ewan McGregor as the baddie Black Mask, and Rosie Perez, playing Gotham City cop Renee Montoya.

Most of them are there in the teaser, but "blink and you'll miss them" is being generous.