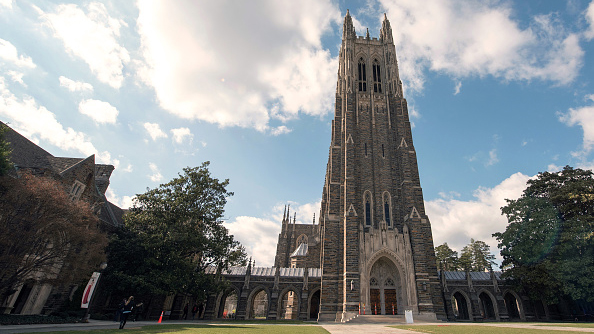 Lance King/Getty Images(NEW YORK) — A Duke University official says she regrets the uproar she sparked by sending an email to international students warning them to "use English 100% of the time" or risk being blacklisted by some faculty members.
Megan Neely, an assistant professor of biostatistics, stepped down from her position as director of graduate studies for a school of medicine program after her email was leaked on social media over the weekend and slammed by critics as racist.
It was the second such email Neely had sent to international students in less than a year.
In a joint email sent to students on Sunday, Neely and Elizabeth Delong, chair of the medical school's biostatistics and bioinformatics department, issued a "sincere apology" for the email that went out to international students in the biostatistics masters program.
"We very much value our international students and their contributions to our program and we recognize that the message that was sent Friday was not appropriate. Although it was not meant to be hurtful, it came out that way and was clearly in error," Neely and Delong wrote in the email obtained by ABC News from the Durham, North Carolina, school's communications department.
In the email, Neely added, "I deeply regret the hurt my email caused. It was not my intention. Moving forward, it is my sincerest wish that every student in the Master of Biostatistics program is successful in all of their endeavors."
University spokesman Keith Lawrence told ABC News on Monday that while Neely resigned as director of graduate studies for the medical school's master of biostatistics program, she remains a member of the faculty.
"She continues to be an assistant professor of biostatistics," Lawrence said.
In her controversial email, Neely wrote that she had received complaints from two unnamed faculty members of the biostatistics masters program about first-year students speaking Chinese loudly in public areas of the department, including the student lounge and study areas.
She said the faculty members asked her for photos of the first-year students and when she handed them over, they picked out the students they observed speaking Chinese, according to the email that was authenticated by university officials.
"I asked why they were curious about the students' names. Both faculty members replied that they wanted to write down the names so they could remember them if the students ever interviewed for an internship or asked to work with them for a master's project," Neely wrote.
"They were disappointed that these students were not taking the opportunity to improve their English and were being so impolite as to have a conversation that not everyone on the floor could understand," she wrote.
She went on to advise the international students, "PLEASE PLEASE PLEASE keep these unintended consequences in mind when you choose to speak in Chinese in the building."
She wrote that she respected students who come to the U.S. and have to "learn a non-native" language.
"That being said, I encourage you to commit to using English 100% of the time when you are in Hock or any other professional setting," she wrote, referring to the university's Hock Plaza, a 280,000-square-foot building that houses part of the medical school.
Some students posted Neely's email on social media, causing it to go viral and be picked up by Chinese media outlets.
The backlash against Neely on Twitter and other social media platforms was swift as she was called "racist," "xenophobic" and "bluntly disgusting." Some Twitter users questioned why Chinese speakers were only singled out.
A group of Duke students even started a petition calling for an investigation of Neely's "discriminatory emails." By Monday, the petition had gathered more than 2,000 signatures from Duke students.
"We are gravely concerned with the apparently discriminatory actions against international students, as reflected in the emails," the petition reads.
Ken Lee — chief executive officer of Asian Pacific American Advocates, a national Asian civil rights group — said Neely's email showed "ignorance and hateful bias against students."
"As a director of a school of medicine, but also as [a] doctor, it should be inherent to regard others and their cultural backgrounds and differences with respect," Lee said in a statement to ABC News. "Forcing students to repress their heritage language further perpetuates a wrongful culture of fear towards Asian and Asian American students. We hope this case reminds, if not educates, others of the damage ignorant statements like this can cause."
This was the second time in less than a year that Neely had sent out such an email to international students, according to the Duke University student newspaper The Chronicle.
In a February 2018 email, Neely wrote that "many faculty" members, including the chair of the department, had complained of students not speaking English in common areas of the department.
"Bottom line: Continuing this practice may make it harder for you and future international students to get research opportunities while in the program," Neely wrote in February.
In a letter to students, Mary Klotman, dean of the Duke University School of Medicine, tried to allay fears prompted by Neely's email. Klotman said she has asked Duke's Office of Institutional Equity to investigate the matter.
"There is absolutely no restriction or limitation on the language you use to converse and communicate with each other," Klotman wrote. "Your career opportunities and recommendations will not in any way be influenced by the language you use outside the classroom. And your privacy will always be protected."