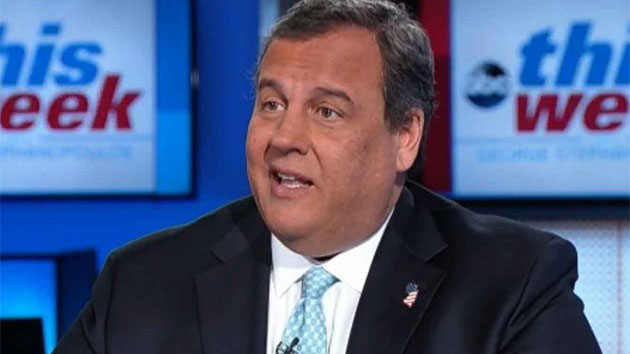 ABC News(NEW YORK) — President Donald Trump asked former New Jersey Gov. Chris Christie multiple times if he would be willing to be vice president, according to an excerpt from Christie's upcoming book.

Christie lifted the veil on his friendship with Trump in "Let Me Finish: Trump, the Kushners, Bannon, New Jersey, and the Power of In Your Face Politics," which is out this week.

The former 2016 presidential candidate and ABC News contributor wrote that "one day in May" Trump called him at his office in Trenton, New Jersey, asking if he was willing to be considered as his running mate.

"I don't think he was surprised by my answer," Christie wrote, adding that he'd been open about his "interest in the job" since the day he and his wife, Mary Pat, showed up to Trump Tower to endorse Trump's candidacy.

Christie went on to describe the confusion that ensued in the coming weeks, saying that although on May 10 of that year Trump told The Associated Press that he was considering "five or six people," the future president still called him one evening in June asking him if he was "ready."

"Am I ready? Ready for what?" Christie asked.

"You know what," Trump replied, according to the book.

At that point, the vice presidency "didn't feel like an exercise anymore" or like "some theoretical possibility," Christie wrote. "It felt real."

But, influence from the rest of the Trump clan may have been what thwarted Christie's name from being added to the ballot, and then-Indiana Gov. Mike Pence was chosen instead.

An excerpt from "Let Me Finish: Trump, the Kushners, Bannon, New Jersey, and the Power of In-Your-Face Politics." Reprinted by permission of Hachette Books. All rights reserved.

One day in May, Donald called me in my Trenton office and asked straight-out, “Are you willing to be considered for vice president?” I don’t think he was surprised by my answer.

From the day Mary Pat and I showed up at Trump Tower for our endorsement breakfast with Donald and Melania, I’d been open with him about my interest in the job. Vice president and attorney general. Those were the two positions I had my eye on.

Having been on Mitt Romney’s short list in 2012, I had some idea what to expect. I’d have to provide a giant stack of paperwork—tax returns, investment statements, speech transcripts, campaign finance reports—detailing every imaginable aspect of my personal and professional life.

On May 10, Donald told the Associated Press that he was considering "five or six people."

By June most of the national media seemed to agree that Trump had a short list, and it was down to three: Former House Speaker Newt Gingrich. Indiana governor Mike Pence, who seemed to have overcome his lukewarm Ted Cruz endorsement.

Donald was, calling from Indiana, where earlier in the evening he’d been introduced by Pence at a rally in Westfield. “I’ve got a question for you,” he said.

“We’re fine,” I said. “Don’t you worry about it. We’ve been through plenty of scrutiny. This won’t bother us.”

“All right,” he said. “Well, I’m going to make my decision tomorrow.”

As I got off the phone with Donald, the vice presidency didn’t feel like an exercise anymore or some theoretical possibility. It felt real. It felt likely. It felt like something I had better prepare myself and my family for.

It was after I said good night to Mary Pat that I got a call from a high-ranking Trump staffer. This person had just been around for a discussion with family members about the vice-presidential decision.

“The family is very upset that he says it will be you,” this person said. “They are getting on a plane and flying to Indianapolis tomorrow morning to meet Donald and get him to go see Pence again. If you’ve got any cards to play, you should play them now.”

Wow. I had no doubt that what I was hearing was the 100 percent, honest-to-God truth. This person had real credibility with me. But what should I do about it? That was the question. My answer? Nothing.

When the media learned the next morning that Trump was meeting with Pence again, Sean Hannity lent Newt Gingrich his plane to fly to Indianapolis and make his own pitch.

People I trusted told me that my tipster was exactly right. Family members, Jared and Ivanka especially, were upset that Donald seemed to be on the verge of choosing me. They flew into action in an eleventh-hour attempt to block that.

I took an early-afternoon train back to New Jersey. The whole way I was thinking, I don’t know what’s going on in Indianapolis, but I’m not hearing from anybody. That didn’t seem like a very good sign. Somewhere after Baltimore, I spoke to Eric Trump. I’d always felt close to Eric.

“Hey,” he said to me, “I want you to know, whatever you’re hearing, you’re under the most serious consideration. Don’t let any of this stuff you’re reading discourage you.”

“Eric,” I told him, “I understand the way this stuff goes, and I’m not worried about it at all.” “Because I really like you, Governor, and I think you would make a great vice president,” he said. “And sometime soon, my father’s going to make this choice.”

Eric was the one person in the Trump family who was saying anything encouraging. I thanked him for calling and said goodbye.

“Are you really sure you want this?” he asked.

I did not take that as an encouraging sign.

So right there, I had to make a fundamental decision. The way he asked the question, it sounded to me like he was asking for an easy way out.

To hell with it, I thought. I’m pushing for this.

“You know it’s going to be a lot of scrutiny,” he said.

“Donald,” I said, “you have to choose whoever you think is best. But I am not backing away. I’m ready for the fight. I want to beat Hillary Clinton. I’ve been in this with you since February. Let’s go do it. I’m in.”

Mary Pat nodded as I spoke. She was clearly with me on this.

“All right,” Donald said. “I’m definitely making the decision today. I just want to make sure that you two are ready for this.”

Early in the evening, I got word from my New Jersey state troopers that Mike Pence was flying into Teterboro, the airport in Bergen County that handles many of the region’s private jets.

Now, that pissed me off.

Donald had offered it to Pence, and he didn’t even call me. So, I called Donald.

“Hey,” I said, “the least you could do, when you made a final decision, is to let me know.”

“I haven’t made any final decision,” he said.

“You haven’t made any final decision? You haven’t offered the vice presidency to anybody?”

“Well, then, explain to me why Mike Pence is landing at Teterboro in half an hour.”

On Fox. Greta Van Susteren interrupted her coverage of a terror attack in Nice, France, to announce she had a special guest, the presumptive Republican nominee for president, Donald Trump.

On air, Donald denied again he’d settled on Pence. “I haven’t made my final, final decision,” he said. “I’ve got three people that are fantastic.”

As soon as the Greta interview was over, Donald called me back.

“Do you believe me now?” he asked.

Frankly, I wasn’t sure what the stunt had proved. “I just don’t know what to make of Pence flying in on—what?—a half promise? That makes no sense to me.”

“I have not made my decision,” Donald insisted.

Nothing was announced Thursday night.

Friday morning, I got to the State House early. I did paperwork in my office for a couple of hours, then had a meeting. That’s where I was when the phone rang. It was Donald again.

I heard him take a breath, and then he spoke. “Chris,” he said,

“I’m about to send out a tweet that I’m picking Mike Pence as vice president.”

“Okay,” I said. “Congratulations, Donald. Good luck. Good luck to you and Mike. Obviously, I’ll be there to help you.”

“Are you disappointed?” he asked.

“Of course, I’m disappointed,” I said, “but these are your choices, not mine.”

“You’ve got to understand, Chris,” he said. “He’s out of Central Casting.”