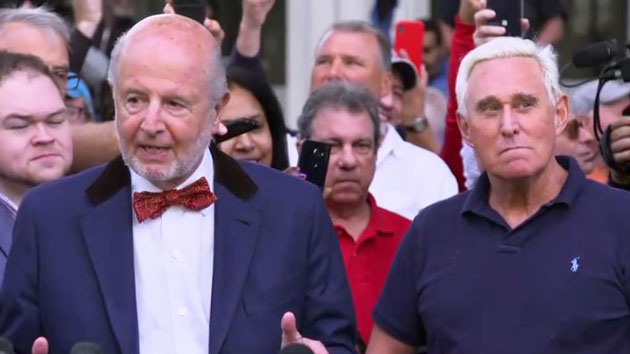 ABC News(NEW YORK) — Following a pre-dawn arrest at his home in Fort Lauderdale, Florida, on Friday and ahead of an arraignment in Washington on Tuesday, Roger Stone spoke with ABC News' Chief Anchor George Stephanopolous on “This Week” Sunday.
Stone, 66, President Donald Trump’s longtime friend and a veteran political operative, was arrested after special counsel Robert Mueller filed a seven-count indictment against him as part of an ongoing probe into Russia interference during the 2016 election.
The special counsel leveled against Stone five counts of lying to Congress, one count of obstruction of an official proceeding, and one count of witness tampering. Stone was arrested and appeared in court in Fort Lauderdale, Florida, late Friday morning. The indictment was filed on Thursday.
Within hours of the FBI’s arrest, Stone made an initial court appearance Friday morning, where a federal judge set his bond at $250,000 and limited his travel to Florida, New York, Virginia and Washington, D.C.
The charges brought by Mueller’s office largely revolve around false statements Stone is accused of making to the House and Senate Intelligence Committees regarding his communications with associates about WikiLeaks.
“I am falsely accused of making false statements,” he said Friday outside the federal courthouse in Fort Lauderdale. “I look forward to being fully and completely vindicated.” Stone pledged to fight the charges and reiterated his support for Trump, a man who he supports politically and considers a close friend.
“There is no circumstance whatsoever under which I will bear false witness against the president,” he said Friday. “I am one of his oldest friends. I am a fervent supporter of the president.”
This is a developing story, please check back for updates.
Copyright © 2019, ABC Radio. All rights reserved.