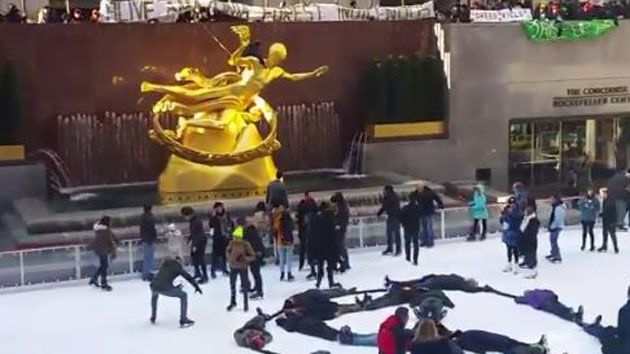 @LAKauffman/Twitter(NEW YORK) — Nine climate change activists were arrested while staging a protest at the nation's most famous ice skating rink on Saturday.
The activists, who laid down in the middle of the ice rink at Rockefeller Center around 2:45 p.m., were part of a group called the Extinction Rebellion. The protesters formed an hourglass logo with a circle around it — the group's logo.
The protest was part of what the group called a "nationwide day of nonviolent civil disobedience and protest," according to its website.
The nine arrested protesters were taken to the police department for processing, but charges were not announced, according to New York ABC station WABC.
"That was one of the actions that we — the Extinction Rebellion — had planned, and it was intended to create a very stark visual, drawing attention to the urgency of the matter, which is that climate change breakdown poses an immediate and existential threat to life on earth," organizer Rory Varrato told WABC.
The group also unfurled a banner on the bronze Prometheus statue next to the rink reading "Climate Change = Mass Murder" and "Rebel for Life."
Despite the protest, and NYPD officers milling about the demonstration, dozens of skaters continued to use the rink.
Extinction Rebellion's Twitter page decried the arrests taking place "while the corporatocracy aided & abetted by the MSM [mainstream media] commits ecocide."
The protesters want the government to acknowledge the truth about the climate, enact laws to reduce carbon emissions to zero by 2025 and institute a Citizens Assembly to monitor the change, according to their site.
President Donald Trump has actively denounced climate change and ridiculed the concept on his Twitter page. Just a week ago, the president warned people of cold weather in the Midwest and Northeast and joked, "Wouldn’t be bad to have a little of that good old fashioned Global Warming right now!" He's used a similar line — despite its scientific inaccuracy — many times in the past.
Trump also pulled the U.S. out of the Paris Climate Accord in June 2017, the agreement signed by 147 countries in April 2016, which included a pledge to reduce emissions of greenhouse gases that contribute to climate change.
Copyright © 2019, ABC Radio. All rights reserved.