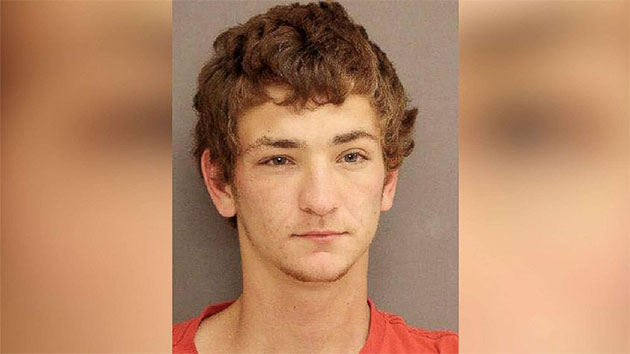 Ascension Parish Sheriff's Office(NEW YORK) — An "armed and dangerous" 21-year-old man from Louisiana who allegedly fatally shot his parents, girlfriend, her father and her brother was captured Sunday morning in Virginia by sheriff's deputies who arrested him at gunpoint, authorities said.

Dakota Theriot was wanted on multiple counts of first-degree murder, home invasion and weapons charges after an alleged killing spree that began in Livingston Parish, Louisiana — just east of the state capital, Baton Rouge — and continued at his parents' trailer in Ascension Parish.

Theriot was arrested in Richmond County, Virginia, more than 1,000 miles from where he allegedly went on the killing rampage, Ascension Parish Sheriff Bobby Webre and Livingston Parish Sheriff Jason Ard said in a joint statement.

Richmond County Sheriff Steve Smith said his agency was alerted that Theriot has family ties in Richmond County. While deputies were checking the homes of Theriot's family members, a relative of the suspect called and directed them to a house in Warsaw, Virginia, Smith said.

"While deputies were on site, Theriot arrived at the residence in a motor vehicle with a firearm pointed out the window," Smith said in a statement. "The deputies sought cover and challenged Theriot, who then dropped the firearm upon their commands and was taken into custody without incident."

He was booked at the Northern Neck Regional Jail in Warsaw and was being held without bail pending an extradition hearing, Smith said.

Authorities said deputies arrived at Theriot's parents' home on Saturday in time to interview his dying father, who identified his son as the shooter.

Ascension Parish Sheriff Bobby Webre said during a press conference that dispatch received a call at about 8:45 a.m. about the two shootings, the victims of which were Theriot's father, Keith Theriot, 51, and his wife Elizabeth Theriot, 51.

Summer Ernest had recently started dating Theriot, according to her relatives.

Webre called the first incident a case of domestic violence and said that Dakota Theriot was recently asked to leave the residence and not return.

"It's been a long time since we've had anything of this magnitude when it comes to domestic violence," Webre said during the news conference. "We don't know the relationship between the father, the mother and the son at this time."

The Ernest family's two youngest children — ages 1 and 7 — were unharmed in the shooting. Neighbor Charlene Bordelon told The Advocate she called 911 after the children told her that their father, brother and sister were dead.

"She was terrified," Bordelon said of the little girl, the newspaper reported. "It's so heartbreaking."

Bordelon and her husband said moments before the children knocked on their door, they heard a truck speed away from the home.

Webre said Theriot had been driving a 2004 Dodge Ram pickup truck that belonged to his parents.

Prior to Theriot's capture, Webre described the suspect as an "armed and dangerous guy" and warned that anyone who came in contact with him "could be a target."

In a previous run-in with the law in 2017, Theriot was asked to exit his vehicle during a traffic stop but instead drove off, throwing suspected marijuana out of the vehicle. When he was arrested, police found marijuana and paraphernalia in his possession, according to the St. Charles Parish Sheriff's Office.