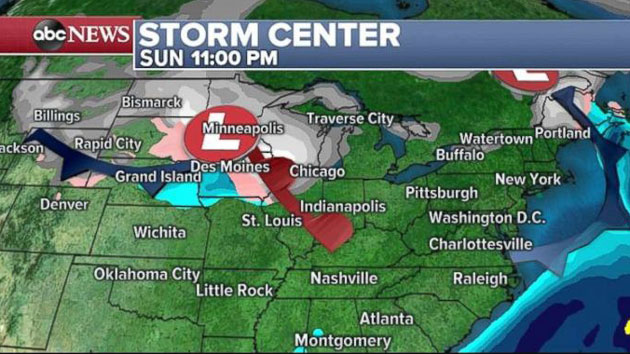 ABC News(NEW YORK) — The National Weather Service has already issued alerts ahead of a clipper system — a fast-moving blast of snow, ice and rain originating in central Canada — that will move into the Midwest on Sunday afternoon.
Conditions are expected to be rather windy Sunday from Montana to Nebraska, with gusts in excess of 60 mph. Snow that is already on the ground will be picked up by the gusty winds, and visibility can be drastically reduced.
The disturbance moves into the Midwest on Sunday afternoon with snow expected to fall by the time the low reaches the eastern part of the Dakotas. Winter weather alerts have been issued from the Northern Plains east to Michigan.
The clipper system will be in the Northern Plains by late Sunday night.
Cold air behind the low, and moisture being wrapped into the system, will bring the heaviest areas of snow from southeastern North Dakota to northeastern Iowa late Sunday.
The Chicago area will see snow on Monday afternoon.
The Chicago metro area will be in the bull's-eye of the clipper system Monday morning into early afternoon.
Areas south and southeast of Chicago have a greater chance of seeing rain or a wintry mix, however, snow is possible into Missouri.
The clipper system will move into the Northeast on Tuesday, with snow inland and rain and an icy mix on the coast.
The storm will race eastward and impact the Northeast and Mid-Atlantic by Tuesday night.
For coastal areas and the New York metro area, rain will dominate at first. As the cold front passes through Tuesday night into early Wednesday morning, precipitation is expected to change over to snow.
While accumulation amounts will likely be very low for the New York City area, the rain and then snow Wednesday morning could make for a sloppy and potentially hazardous commute.
Snowfall totals will be 6 to 12 inches in northern Michigan, northern New York and northern New England, with lesser totals farther south and closer to the coast.
Forecasts show a relatively thin amount of excessive snow accumulation in the storm’s wake. Southern Minnesota and Wisconsin as well as upstate New York and northern New England will see the greatest snowfall — about 6 to 12 inches with locally higher amounts possible.
There will be little accumulation along the coast.
Dangerous cold follows snow
Behind the clipper system, brutal cold temperatures will move into the Northern Plains on Monday.
A dip in the jet stream associated with the passage of the clipper system will bring extremely cold air from the Arctic south into the Midwest.
The air mass will begin to drop temperatures immediately in the wake of the clipper, but its full effect will not be felt until midweek.
By Wednesday, wind chill temperatures will reach unprecedentedly low levels: minus 60 in Iowa, Minnesota and North Dakota, and 50 below in Chicago.
Record breaking high and low temperatures are possible. The temperature in Chicago on Wednesday is minus 11, and the low is minus 20. If this occurs, it will smash the previous records for Jan. 30 of 3 degrees and minus 15, respectively.
The all-time record low temperature in Chicago was minus 27 on Jan. 20, 1985. There is an outside chance this will be broken.
These temperatures will be the coldest that the region has seen in decades. Everyone should exercise caution when heading outdoors, and they should prepare their homes and cars for such brutally cold conditions.
Copyright © 2019, ABC Radio. All rights reserved.