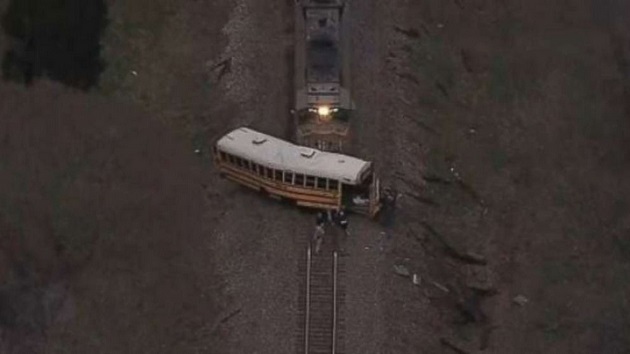 WFAA(ATHENS, Texas) — A 13-year-old middle school student is dead after a train plowed into a bus at a crossing with no warning lights or gates in a small town in east Texas.

The accident happened at approximately 4 p.m. in Athens, about 70 miles southeast of Dallas, as the bus driver was taking students home from school. There were three people on the bus at the time of the accident: the driver and two students.

It is still unclear what caused the bus and train to collide, but authorities are interviewing the bus driver, who was found outside the bus as first responders arrived at the scene just three minutes after the call. On Saturday, the Athens Police Department said the bus came to a stop initially, but then continued across the tracks in front of the train.

The boy, 13-year-old Christopher Bonilla, was found dead outside the bus, which had been pushed a quarter mile down the tracks by the Union Pacific train. A 9-year-old girl, Joselyne Torres, was extricated from the bus and flown to Dallas Children's Hospital in critical condition, Athens Police Chief Buddy Hill said.

Torres had surgery and was in stable condition on Saturday, police said.

"I've been in this profession for 21 years and this is by far the worst day of those years," Athens Independent School District superintendent Blake Stiles said at a press conference. "I don't really have the words to tell you what I'm thinking. … It's just a superintendent's worst nightmare."

The bus driver, 78, was taken to the hospital in stable condition. He was identified on Saturday as John Stevens.

"It is with great sorrow that we confirm one of our precious middle school students lost his life today when a district school bus collided with a train in Athens," the school district said in a statement.

"We ask that you join with us in humbly praying for their families," it added.

Officials said there are no warning lights for trains, bells or gates that come down to stop vehicles from driving over the track. There are flashing lights and a train crossing sign on the road.

"A witness to the crash reported hearing the train’s horn as it approached the intersection," police said Saturday.

The engineer and crew on the freight train was not injured.

Dozens of community members gathered at the First United Methodist Church in Athens on Friday night for a vigil.

The accident was the second involving a Union Pacific train in Texas this month. A freight train derailed in Aubrey, about 50 miles north of Dallas, on Jan. 9. It came off the tracks dangerously close to a number of houses. No one was injured, but one house suffered minor damage.