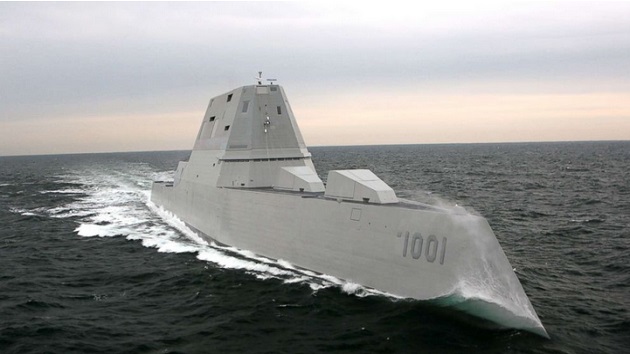 U.S. Navy(SAN DIEGO) — The Navy will commission its newest destroyer on Saturday, named in honor of Medal of Honor recipient Petty Officer 2nd Class Michael A. Monsoor.
The Navy SEAL was posthumously awarded the Medal of Honor by President George W. Bush in 2008 for his actions in Ramadi, Iraq on Sept. 29, 2006.
The USS Michael Monsoor, the Navy's second Zumwalt-class destroyer, will be commissioned at Naval Air Station North Island in San Diego, where the ship will be based. With its distinct angular shape designed to give it stealth capabilities at sea, the Zumwalt-class is the Navy's most technologically advanced and expensive destroyer ever built.
In attendance on Saturday will be Monsoor's mother, Sally Monsoor, who will also serve as the ship's sponsor and give the first order to "man our ship and bring her to life," the Navy said in a press release.
Monsoor enlisted in the Navy in 2001, becoming a SEAL in 2004. On the day he was killed in Ramadi, he was part of a "sniper overwatch security position" with two other Navy SEALs and four Iraqi Army soldiers when an insurgent threw a grenade at the team, according to a Navy narrative of events.
"Positioned next to the single exit, Monsoor was the only one who could have escaped harm," according to the Navy description. "Instead he dropped onto the grenade, smothering it to protect his teammates. The grenade detonated as he came down on top of it, inflicting a mortal wound. Monsoor’s actions saved the lives of his two teammates and the accompanying Iraqi soldiers."
At his Medal of Honor ceremony, Bush quoted one of the survivors of that day, who said, "Mikey looked death in the face that day and said, 'You cannot take my brothers. I will go in their stead.'"
The citation on his medal reads: "By his undaunted courage, fighting spirit, and unwavering devotion to duty in the face of certain death, Petty Officer Monsoor gallantly gave his life for his country, thereby reflecting great credit upon himself and upholding the highest traditions of the United States Naval Service."
Lt. Cmdr. Jocko Willink, a former Navy SEAL task unit commander, in an interview with the Navy prior to the ship's commissioning, said, "There is no way a steel and iron ship can ever replace the flesh and blood that was Michael Monsoor. But it seems there can be no more fitting memorial to him than a warship — a warship that proudly bears his name.
"And in this ship and in its crew, Mike's spirit will live on. Through this ship, Michael Monsoor will still represent the very best this country has to offer. He will inspire the crew just as he inspired his teammates."
The third ship of its kind — the future USS Lyndon B. Johnson — is expected to be christened in the spring of 2019, according to the Navy.
Copyright © 2019, ABC Radio. All rights reserved.