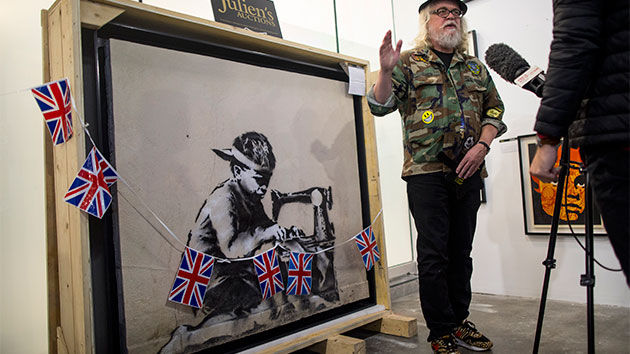 Barbara Davidson/Getty Images(PARIS) — A mural painted by famous graffiti artist Banksy that is believed to be a homage to the victims of the 2015 Paris terror attack has been stolen, Bataclan theater officials said today.

The artwork, depicting a woman with her head bowed solemnly, had been painted on one of the exit doors in the theater, where 90 people were killed in a terror attack on Nov. 13, 2015.

The British artist, whose identity is still unknown after decades of speculation, could not be reached for comment.

"We are today filled with a deep sense of indignation, read a tweet from the Bataclan theatre Twitter account. "The work of Banksy, a symbol of contemplation belonging to all — residents, Parisians and citizens of the world — has been taken from us."

The theater's alarm was triggered around 4:25 a.m. Saturday morning and the thieves were spotted leaving in a van, Paris police officials said. The theater has CCTV, but the footage has not been released to the public and the investigation remains ongoing, police said.

Ninety people were killed at the theater, which was one of a series of targeted attacks by men claiming allegiance to ISIS that claimed 130 lives.

Following the attack, the theater remained closed for a year. It reopened in 2016 and still offers live music performances.

The Bataclan mural is just one of many in Paris believed to be by the elusive street artist Banksy. A series of murals that seem to critique French immigration policy appeared across the city in 2018.

Works believed to be created the artist have fetched hefty sums at auction in recent years — and have been the targets of thieves.

In June, a Banksy print worth an estimated $45,000 was stolen from a Toronto art exhibit.

In a stunt that left the art world aghast and generated headlines all over the world last fall, a framed Banksy original, "Girl With Balloon," that sold for $1.4 million self-destruct via a shredder hidden in the artwork's frame — moments after the auction gavel struck, signaling a final sale.

After the shock wore off, art experts posited that the piece may now become even more valuable in the future, despite the seeming destruction of the artwork itself.